This realm is connected to the realms: Blackwing Lair US, Dethecus US, Detheroc US, Haomarush US, Shadowmoon US 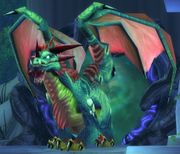 The dragon Lethon is the realm's namesake and mascot

"I can sense the SHADOW on your hearts. There can be no rest for the wicked!" —Lethon

Lethon (named for an elite emerald dragon in WOW and Warcraft lore) is a PvP realm in the US Pacific time zone. It opened on June 16, 2006. The server was historically a Horde-dominated, low-population, realm for nearly 3 years after opening, but in the spring and summer of 2009 it was listed as a realm for "New Players" and saw a dramatic rise in population for a time. In the summer of 2009, it peaked at 25,000 characters in a census of that time.

As of Summer 2010 however, a vast number of the realm's better players transferred off. There are roughly 7,000 characters left on the realm, few PvE progression feats, and precious few Arena PvP players with high ratings, especially when compared to other realms.