This realm is connected to the realms: Ghostlands US, Gnomeregan US, Grizzly Hills US, Kael'thas US, Lothar US, Moonrunner US, Trollbane US 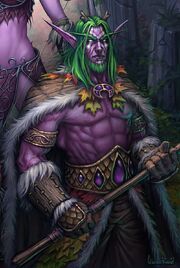 Malfurion Stormrage is the greatest archdruid of all time, and one of the most powerful mortals in the Warcraft universe. He is the twin brother of Illidan Stormrage, and the husband of Tyrande Whisperwind. Malfurion started the practice of druidism among the night elves under the tutelage of the demigod Cenarius. Following the conclusion of the War of the Ancients, he became the Archdruid of the night elves. Often he is called shan'do, meaning "honored teacher". However, some close friends occasionally tend to call him "Furion" or "Mal".

When did Malfurion open?
Malfurion became the 47th player-versus-environment (PvE) realm in the US, on November 8, 2005. An Oceanic-preferred PvE realm Khaz'goroth, along with three PvP realms: Agamaggan, Azshara, Frostmourne (Oceanic) and an RP-PvP realm Lightninghoof debuted the same evening. Together, they are the 112th, 113th, 114th, 115th and 116th realms to open for players in North America and Oceania. Draka replaced Malfurion as the newest PvE server on November 30, 2005.
What time zone is Malfurion?
North American Central Time (CST) Eastern Time (EST).

What is the Alliance to Horde ratio? Total population?
According to Warcraft Census, it was 1.?:1 as of July 6, 2013. The total population of the realm is approximately 12,000 characters.

Note: Warcraft Census has been mostly inactive for months now, so it is difficult to find an accurate A:H ratio based on active characters. It can only be noted that after having long been a realm of "medium" population, Malfurion US was reclassified as being a "low" population realm in January 2014.

History
On July 31, 2014, Malfurion was connected to Trollbane. This had the effect of changing the server time and moved the realm to the battlegroup Ruin (the original being Shadowburn).

On August 4, 2020, Malfurion/Trollbane was connected to Grizzly Hills and Lothar.

On September 17, 2020, the servers Ghostlands and Kael'thas joined the group.