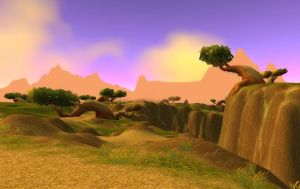 Nagrand is a European PvE server launched around the time of the release of The Burning Crusade.

In order to offer a fresh start for new and old players alike the server has been closed for transfers of any kind during its first six months of existence. As a natural consequence of this all major guilds on the server are native rather than transferred, and as such the raid progress has been somewhat slower than that of established guilds on older servers.
On the 17th of July 2007 the server opened up for paid character transfers and has since had a steady influx of transferring high level characters from older servers.

Alliance:
The Alliance guild Imperium was first with downing new bosses.
Imperium got the server first Illidan kill on 16/02/2008.
They continued into the Sunwell Plateau and killed the first boss, Kalecgos.
At this stage, Imperium had some trouble thereafter and stepped down from 25-man raiding.
Soon after on the Alliance side it was Heretic and Mutiny that were gearing up in Black Temple and Caverns of Time: Hyjal Summit.
Both guilds have cleared Mount Hyjal and Black Temple and started to raid Sunwell Plateau aswell.
Heretic soon claimed the server first Brutallus kill, and a few weeks later, after the last Burning Crusade patch Heretic also claimed server firsts on the remaining Sunwell Plateau bosses.

Horde:
Old School took the first horde kill for Kael'thas.
Horde guilds: Old School and Mutilate were racing each other to get as many Horde Firsts on the server in MH and BT.
Old School managed to get them all in MH with Mutilate taking a few in BT.
The first Horde Illidan kill was done on 25/05/2008 by Old School with Mutilate coming in a strong second at 27/05/2008.
Kalecgos & Sathrovarr the Corruptor was finally killed by Mutilate on the 5th of August 2008, with Old School coming in second following shortly afterwards.

Origin of the name 'Nagrand'

Nagrand is the name of a region in southwest Outland, added to the game world with the release of The Burning Crusade.

Nagrand is the last unscarred region in Outland. It is the ancestral home of the orcs and the heart of early orcish shamanism. Today it is a fertile retreat where elementals commune with mortals on a regular basis. Marauding ogres from the Blade's Edge Mountains, meaning to claim the territory as their own, currently pose the greatest threat to this unspoiled reserve.

Nagrand has its own IRC server which can be found at: #nagrand.wow @ Quakenet

Note: Feel free to add your own guild here with a link.

Note: When X1/X2 is shown, it is showing how many bosses(X1) out of the total amount of bosses(X2) have been defeated in areas with more than one.
When a boss is marked with a 'X' then it is downed by that guild; a '-' means it hasn't been downed yet.

Note: When a boss is marked with a 'X' then it is downed by that guild; a '-' means it hasn't been downed yet.

Note: When a boss is marked with a 'X' then it is downed by that guild; a '-' means it hasn't been downed yet.