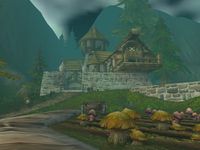 This realm is connected to the realm Twisting Nether US

Named after a human community of thieves and assassins in the Alterac Mountains, Ravenholdt has become known over the years as a rare RP-PVP server that is able to maintain the balance between an active roleplaying community within dangerous PVP environs marked by the state of constant warfare between Alliance and Horde.

Ravenholdt is the newest, and yet perhaps the most renowned, North American RP-PVP realm in the World of Warcraft universe. This type of server emphasizes roleplaying the interactions between characters, and yet also maintains a focus on having a part to play in the brutal ongoing war between the factions.

The youngest among all RP-PVP realms, Ravenholdt is now actually over four years old and has a healthy, mature population of roleplayers. The realm went live in December 2006 during the last days of "vanilla WoW" as the only RP-PVP realm in the Whirlwind battlegroup.

Being the most recent RP-PVP addition, the realm continues to attract new players, a great deal of whom are active RPers seeking a more competitive PVP environment than they found on the standard RP realms. Many others are refugees from other RP-PVP realms that never quite established the deep roots of Ravenholdt. Also seen transferring in are the occasional PVP enthusiasts looking to try their hand at RP, often in an effort to escape the l33tspeak and young kids or immature mentalities of standard PVP servers.

Owing to the nature of its namesake "House guild", many Alliance and even Forsaken guilds on the realm tend to be "House guilds" akin to Ravenholdt itself or the Barov family. Similarly, Kalimdor-based Horde guilds on the realm are often structured as "Clan guilds" of a specific race or interest. Such guilds of Ravenholdt are known far and wide. As just one example, a Clan guild composed almost entirely of orcs, the Shadowclan, featured prominently in the 5th anniversary celebration at the official World of Warcraft website.

Ravenholdt still reigns as the newest of the RP-PVP servers. Unlike its peers, Ravenholdt launched alongside several regular PVP servers and perhaps because of this, RH avoided much of the LAWLREROLL non-roleplaying populace that previously diluted other servers of this archetype.

Thus, Ravenholdt has remained relatively roleplaying based even after three years of existence. It is both a safe and a true statement that no other server of the RP-PVP archetype can claim as much RP per capita. Whereas other RP-PVP realms such as Emerald Dream, Lightninghoof, and The Venture Co have often been seen as having the status of their RP communities be pronounced either "dead" or, at best "on life support," Ravenholdt is a burgeoning, RP haven.

The realm is a wonderful place for new RPers to settle, with friendly players and an exciting yet dangerous environment to immerse a new character in.

Ravenholdt guild information can be found at Guild Information.

Ravenholdt rare craftables and enchants can be found at Rare Craftables/Enchants.