This realm is connected to the realm Alexstrasza US

Terokkar is a CST PvE server that was created to coincide with the release of The Burning Crusade on January 16, 2007. Transfers to Terokkar were opened in mid-July. 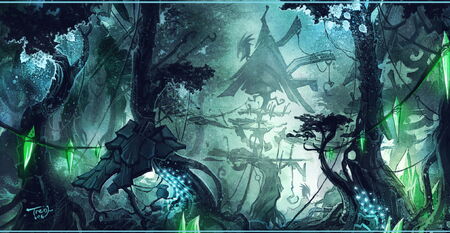 Concept art of the Terokkar Forest.

Terokkar was launched on January 16, 2007 to coincide with the release of The Burning Crusade. Unfortunately, early life on the server was somewhat lacking. As had been predicted beforehand, a large proportion of players chose to play as the newly-introduced Blood Elf race, leading to a very significant faction imbalance. After initially constituting more than 50% of all Horde toons and easily outpopulating the entire Alliance, Blood Elves have declined to represent a more modest 20% of the entire Terokkar playerbase, undoubtedly due to many Blood Elf players quitting after sufficiently experiencing the new race.

However, despite the Blood Elf infusion, Terokkar's population, like those of its sister TBC-release realms, remained woefully small. This is most likely due to the fact that several servers were released not long before TBC's release and served to attract away a large portion of the playerbase that would've rolled on Terokkar instead. In the server's first months, the lack of players on Terokkar threatened to become a self-perpetuating phenomena due to players hitting the maximum level, becoming bored due to the lack of options due to the small playerbase, and transferring away. Many of Terokkar's early prominent guilds indirectly failed due to this circumstance (see the 'Dead Guilds' subsection below for noteworthy examples), and many of its first players to hit 70 have left the server.

Eventually Terokkar and several of the other non-transfer TBC-release servers were flagged as "Recommended" destinations for new players, which lead to a substantial population influx. Combined with the advent of several PvE-oriented groups finally making solid progress in Karazhan, the playerbase finally expanded and solidified to the point where its initial problems are largely a memory. Terokkar's population is still somewhat small, and its progress somewhat set back by its early failures, but these problems are gradually being overcome.

[Retaliation] battlegroup. The reasons behind this change were twofold: First, both Cataclysm and Frenzy were perceived as being too inactive due to the small number of servers in their compositions and the fact that these servers were generally low-population. Secondly, Frenzy's servers had massive queue times for Horde players due to persistent issues of faction imbalance, and the merge with Frenzy, which featured low queue times for both sides, served to dilute Frenzy's problems among a larger (Horde) population. This change is still the object of resentment by some ex-Cataclysm players.

Currently, Terokkar is a largely-peaceful server without serious conflict and drama, within and between both factions. This serves as a testament to the server's atmosphere of maturity and amiability. Even the World PvP, where it exists, is generally good-natured.

One weakness of the server is its lack of a serious PvP base. There are few PvP-oriented guilds, and although raids on towns are daily occurrences, the general perception is that Horde has a greater interest and hence tends to dominate World PvP. However, this dominance has been significantly reduced over the months due to the decline of the server's initial faction imbalance. Any lack of World PvP is most likely attributable to Terokkar's small population rather than pacifist attitudes or faction imbalance.

All prominent guilds on the server are PvE-oriented, and several are making steady progress through raid encounters. In terms of PvE, Terokkar is home to all types of guilds of various degrees of dedication to the game.

Due to Terokkar's recent "Recommended" status, an influx of new characters has caused a huge number of small, low level guilds. As such, I will list the guilds of note (past and present) and a little bit about each. I need someone Horde side to do the same.

The best place to keep up with the most up-to-date realm progresion information is, of course, the official Terokkar Realm Progression Thread

Terokkar progression can also be found at Terokkar Progression. 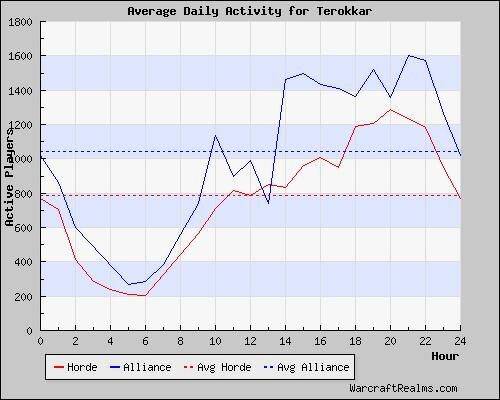 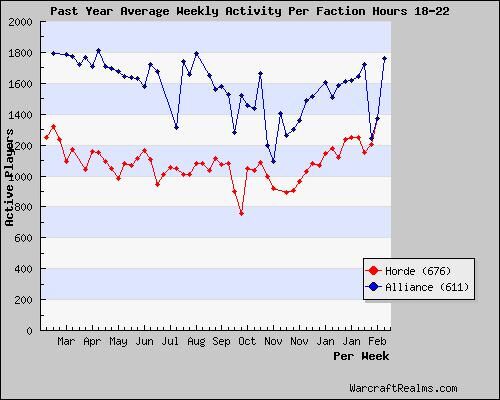 For day to day players under the graph "All US PvE" average alliance/horde: 989/602.