This realm is connected to the realm Skullcrusher Europe 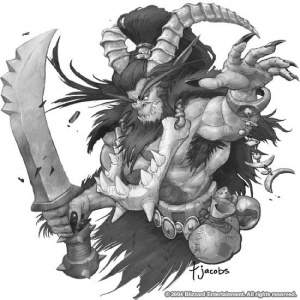 Lord Xavius, first of the satyr.

Xavius is a PvP realm.

Lord Xavius was a powerful user of magic, and the high councilor to Queen Azshara. He is described to have eyes that are black with ruby streaks running through them, which had replaced his eyes long ago. He is perhaps the night elf most responsible for the Burning Legion's interest in Azeroth. It was Xavius who first became convinced that Sargeras, ruler of the Burning Legion, was a god sent to deliver Azeroth. Xavius also convinced the night elven queen Azshara of the necessity of turning the will of her mages, the so-called "Highborne", towards creating a portal into the Twisting Nether through which Sargeras and the Legion could enter into the world. Xavius was successful enough in his endeavors to welcome several ranking members of the Legion into Azeroth, including Hakkar the Houndmaster and several Felguard, before the intervention of the young druid Malfurion Stormrage. Xavius was the mastermind behind a plot to block any non-highborne magic user from accessing the Well of Eternity in order to channel the extra energy gained into making the portal to the Twisting Nether strong enough for Sargeras to cross through. Xavius's plot was defeated by Malfurion, who interrupted Xavius's final incantations and destroyed him completely. However, his soul was captured by Sargeras, and Xavius was mercilessly tortured.
Click to read more about Lord Xavius..

For detailed PvE progress and kill dates, go to: http://wowjutsu.com/eu/xavius/

If you think your guild should be added, refer to the talk page.