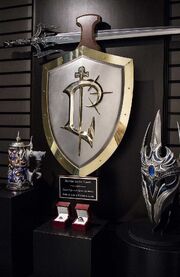 The Service Awards are rewarded to Blizzard employees as a token of appreciation for their dedication and commitment to the company. They are an important Blizzard tradition that began in 1996. These ceremonies recognize the dedication and commitment demonstrated by those who help Blizzard create the most epic entertainment experiences...ever. Several times a year, Blizzard employees around the world gather to celebrate the two-, five-, ten-, fifteen-, twenty-, and twenty-five-year milestones of their friends and colleagues with a ceremony where each recipient is honored with their service award.

The photos up to year 2011 were photographed by Thomas L. Hicks for Blizzard Entertainment.

The rings are available in both male and female versions.

The sword's design changes every year. In 2018, there have been signs of them doing a medallion as the 5-year reward as another option.