Setesh, Construct of Destruction, is a boss of the Halls of Origination in World of Warcraft: Cataclysm.

Setesh is one of the guardians of the Halls of Origination. Like the other constructs within the halls, Setesh was created to protect the powerful device capable of resetting all life on Azeroth. Each of the keepers has a sphere of influence. Isiset presides over magic; Setesh, chaos; Ammunae, life; and Rajh, the sun.[2]

In the early stages of the Fourth War, High Commander Kamses confirmed that Rajh and the other keepers were dead.[1] After N'Zoth was freed from its prison, and the Black Empire invaded Uldum, a Void-corrupted version of Setesh could be briefly seen in the Old God's vision of the Halls.

Given the purpose of the Halls of Origination, the titans deemed it necessary to create Setesh, a construct who holds sway over the powers of destruction. Should Setesh ever fall to corruption, the results would be disastrous. 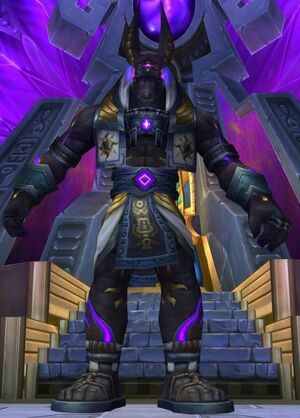 Setesh opens the fight with Chaos Bolts before walking around to select points to open Chaos Portals. He has no threat table whatsoever. What the tank needs to do is to damage Setesh whenever possible and tank all the adds that emerge from the Chaos Portals.

Damage dealers must interrupt Anti-Magic Prison and kill the Void Seekers whenever they emerge. Other than that, they must always focus their attacks on Setesh.

He also casts an AoE around him at certain periods. Simply avoid that.

In heroic mode, the only difference is that the damage dealers must close the Chaos Portals as fast as possible. The portals have 193k hp. This is to reduce the number of void creatures that are summoned. By ignoring the portals, the group will be very quickly overrun.

The Chaos Portals, once opened, will summon a Void Sentinel and 2 Void Wurms. A short time later, a Void Seeker will emerge. Destroying the portals quickly will prevent the Void Seeker from coming out and wreaking havoc on the tank. If they manage to get an Anti-Magic Prison over the tank, the tank will swiftly go down due to large numbers of summoned adds.

Damage dealers will need to destroy the portals as quickly as possible before focusing their attacks on Setesh.

Aggro
You fear that which you cannot control. But can you control your fear?

Setesh appears as one of the bosses that can be encountered in the Tombs of Terror adventure in the Saviors of Uldum expansion for Hearthstone.