Sethe (pronounced "Seethe"[1]) is a deceased primal god who used to be worshipped by the Sethekk. He was ancient enemies with Anzu and Rukhmar, the other major deities of the arakkoa. Sethe was cold-blooded and scornful. When he flew, the winds bit his flesh. He would sun himself on the mountainsides, but he could never taste warmth. His scales were frosted glass, and his children were the wind serpents.[2] He is the source and namesake of the Curse of Sethe, an affliction that causes any arakkoa who touches the blighted waters to become broken and flightless.

The Spirit of Life that saturated the world of Draenor birthed many kinds of animals, but almost all of them were consumed by the Evergrowth and the Sporemounds. But with the end of the Evergrowth by the colossals, life had a chance to thrive on Draenor once more, and the remains of Botaan became forests that teemed with Spirit and accelerated the development of new species. The first to arise were enormous creatures with extraordinary power over the land: some tapped into the power of nature, some the elements, and others the Light and Void. Yet survival was a challenge because of the Primals and Breakers, and winged species proved to be most suited to thrive on Draenor for they could fly out of reach of both forces. Most of Draenor's avians developed in a region called Arak, dominated by a massive spire that towered over dense woods. Three godlike creatures who took form in Arak were Anzu, Rukhmar, and Sethe.[3]

Sethe's wings were short and leathery, and he could not fly as high as Rukhmar. He had an affinity to the shadow energies--the Void--that existed in the universe. For ages, the three largely kept to themselves, fighting off attacks from Primals and Breakers. Only Anzu dreamed of a better world for him and his feathered kin. He called on Rukhmar and Sethe to work together to transform Arak into a sanctuary for winged creatures of all kinds. As one, Anzu and his allies drove the children of stone and root from Arak. With the Primals and Breakers gone, Arak became a haven for winged species. Anzu, Rukhmar, and Sethe settled in as caretakers of the land and its varied species. Sethe ruled the smaller wind serpents and lived with them among the shadowy nooks and crannies at the spire's base. He did not treat his followers with the same respect that Anzu showed the ravens. Sethe was a cruel and demanding master of the wind serpents.[3]

Over the years, Sethe became envious of Rukhmar. He coveted the favor of the wind and the warmth of the sun that Anzu and Rukhmar had. Sethe believed Anzu was also jealous of Rukhmar who looked down on them from the spire and tried to convince Anzu to help him slay her, but Anzu was cunning and cared little for the wind serpents. In addition, Anzu had a secret affection for Rukhmar but never mustered the courage to confess his feelings.[3] In the dark of the night, Anzu sent one of his dread ravens to warn Rukhmar of Sethe's plot. Anzu watched from the top of a mountain spire as Rukhmar and Sethe clashed. Thanks to Anzu's warning, Rukhmar avoided Sethe. She flew high, put the sun at her back, and dove at Sethe. With a flap of her wings, she split the sky upon Sethe like the crack of a whip. Sethe crashed into the spire where they fought with such force that it crumbled and fell around him, creating the Broken Spire. 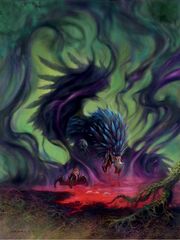 Anzu felt Sethe's hatred coursing through him. His body contorted, his wings shriveled, and he became cursed without flight. His mind was wracked with painful visions. Anzu had contained Sethe's curse by taking it upon himself, and he would grapple with the curse for some time.[2] In revenge, Anzu had his dread ravens slaughter Sethe's wind serpents; in one bloody night, Sethe's children were eradicated.[4][5] Though Sethe's curse weakened Anzu, it also gave him new power: the power of the Void that Sethe had once commanded. As Anzu grew more familiar with his abilities, he shrouded himself in a realm of shadow to hide from Rukhmar forever, horrified at what he had become and how she would react.[3]

Contact with the pools of Sethe's blood at the Sethekk Hollow curses an arakkoa into a broken, wingless state mirroring Anzu's own. Sethe's curse is also passed on through lineage, and arakkoa born of cursed parents are cursed themselves.[6] So strong was Sethe's hate that it animates his blood even in the current day, eons after he was slain by his fellow gods.[7]

The Sethekk eventually abandoned their worship of Sethe in favor of an unnamed Old God.[8][9] When Draenor became Outland, the destruction of the Spires of Arak would have taken Sethe's remains with it.