For the character from the main universe, see Sethe. 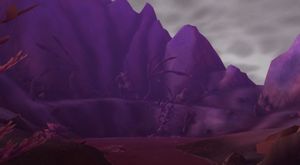 Sethe's remains at the Broken Spire.

"My blood shall blacken the sea until it runs thick as tar! My flesh shall fester and spoil until the very sky rots with it!"
— Sethe's dying curse, spoken to Anzu[1]

Sethe (pronounced "Seethe"[2]) is a deceased primal god worshiped by, and the namesake of, the Sethekk on Draenor. He is ancient enemies with Anzu and Rukhmar, the other major deities of the arakkoa. Sethe was cold-blooded and scornful. When he flew, the winds bit his flesh. He would sun himself on the mountainsides, but he could never taste warmth. His scales were frosted glass, and his children were the wind serpents.[1] He is the source and namesake of the Curse of Sethe, an affliction that causes any arakkoa who touches the blighted waters of Sethekk Hollow to become broken and flightless.

In the time of the war on the alternate Draenor, Sethe's Sethekk followers are attempting to revive him. Anzu, still hungering for vengeance against Sethe, defeats him once again.