Sethekk Halls is a wing of the Auchindoun instance. It's geared for 5 level 67-69 players (although it will appear in the dungeon finder menu for level 66 characters). The entrance is on the east side of the Ring of Observance. It is populated by renegade arakkoa and led by the insane Talon King Ikiss. It should take about 90–120 minutes to complete.

Soloing this instance is viable at 80 and the potential loot drops from it make it reasonably lucrative to do so. For those who do not already have it, the achievement will be granted on completion.

Auchindoun is a former draenei holy site and Horde fortress in the middle of the Bone Wastes, in Outland's Terokkar Forest. It was a holy ground for Draenei burial until the Shadow Council took over, summoned an extremely powerful demon as old as time itself, and destroyed half of Terokkar Forest in the process. Different factions now vie for power in this magical spot: Ethereals suck the arcane energy from the Mana-Tombs, the Burning Legion harvests souls inside the Auchenai Crypts, Arakkoa zealots work dark magic in the Sethekk Halls, and the Shadow Council plots its domination of Outland from within the Shadow Labyrinth.

Sethekk Halls is a wing of the Auchindoun instance. The entrance is on the east side of the Ring of Observance. It is populated by renegade arakkoa and led by the insane Talon King Ikiss, who also carries the

[Shadow Labyrinth Key] for the Shadow Labyrinth. The Sethekk are renegades who broke away from Skettis at the insistence of Ikiss and Darkweaver Syth, and believe themselves to be the true servants of the mysterious master of all arakkoa. When Auchindoun exploded due to the summoning of Murmur in the Shadow Labyrinth, Ikiss and Syth led their followers to Auchindoun, believing this to be a sign of their master's return. There they remain, still searching for the master in the temple's ruins. 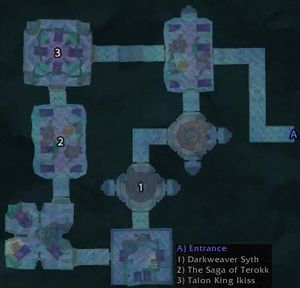 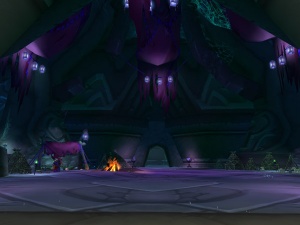 With the changes of patch 4.0.1, this instance no longer requires a great deal of strategy.

The only remaining serious danger is your own party.

The final boss of the instance, Talon King Ikiss, likes to cast an Arcane Explosion. It is a good idea, but not strictly mandantory, to break Line of sight to avoid taking damage. Since it only hits for about 5000 damage, an alert healer can keep the group alive even through multiple explosions.

Killing mobs in the Sethekk Halls grants Lower City reputation up to exalted.

Links to other videos