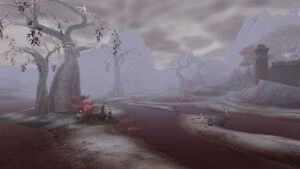 Sethekk Hollow is a swath of fetid pools into which lawbreaking residents of Skyreach are cast by the Adherents of Rukhmar. When winged arakkoa touch the waters of the Hollow, they are infected with the curse of Sethe, twisting their bodies into a hunched, flightless form and driving them to the brink of insanity. Only the powers of the dread raven god Anzu are able to restore the sanity of those arakkoa who are cast into the pools, and the Arakkoa Outcasts regularly attempt to save those they can from the maddening visions brought on by the curse.

It was here that Terokk and his disciples, the first of the cursed arakkoa, were saved by Anzu and given not only the shadowy magic of the raven god, but also

[The Eye of Anzu] with which to commune with him. Using the Eye, they went on to save others cast into the Hollow, and build for themselves a civilization of Arakkoa Outcasts.

Sethekk Hollow was named for the dead god Sethe, whose blood corrupts the ground in accordance with his dying curse upon his own flesh.

Along with Rukhmar and Anzu, Sethe was one of the avian primal gods of the Spires of Arak; but while Rukhmar enjoyed the warmth of the sun and Anzu the shade of the Spires, Sethe felt only the cold bite of the wind. Jealous of Rukhmar's warmth, he plotted with Anzu to kill her. Anzu, however, cared little for Sethe, and shared the bitter god's plans with his prey in secret. In the ensuing battle, Sethe was cast down by the forewarned Rukhmar, crashing into what is now the Broken Spire. As Anzu stepped in to deliver the killing blow, Sethe cursed his own flesh and blood to thicken the seas and blacken the skies. Ever the cleverest of the three gods, Anzu responded by devouring Sethe and picking his bones clean, attempting to leave no cursed blood nor flesh to ruin the world. But a trickle of blood did escape, and the valley it blighted become known as the Sethekk Hollow.

The curse carried by Sethe's blood is potent and eternal, if only for the primal gods and their children: just as Anzu became crippled and flightless after devouring Sethe, when Rukhmar's children, the arakkoa, touch the waters of Sethekk Hollow, they are instantly and irrevocably transformed. Though this curse will carry on to any descendants they may have, it does not appear to affect any other mortal races of Azeroth or Draenor.