For her physical avatar and boss encounter, see Avatar of Sethraliss.

Sethraliss is a snake loa who lives in Vol'dun and is worshiped by the sethrak and Zandalari trolls. She has power over lightning.[1] Her avatar is located in the Temple of Sethraliss. 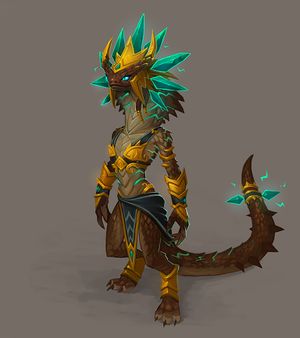 Long ago, Sethraliss represented the lush jungle region of Vol'dun, where she was worshipped by both the sethrak and the Zandalari trolls.[2] During the Aqir and Troll War[2] roughly 16,000 years ago,[3] Mythrax the Unraveler descended upon Vol'dun. He slaughtered troll and sethrak alike. Sethraliss sacrificed herself to save them, but though she struck Mythrax down Mythrax was still able to destroy the disc at the heart of Atul'Aman.[4] After the battle, Sethraliss' devoted followers transported her remains and built a temple around them while they awaited her rebirth.[5] After witnessing the destruction firsthand, the sethrak knew that something had to be done to prevent anyone from raising Mythrax again. Sulthis, Vorrik, and Korthek worked together to seal Mythrax within the great pyramid.[4]

Years later, Korthek grew power hungry and sought to free Mythrax to conquer Zuldazar. He gathered like-minded sethrak and declared himself emperor. Vorrik and other sethrak who were still loyal to Sethraliss were forced into hiding.[4] To Korthek's Faithless, Sethraliss became forgotten or, more often, reviled. However, the Devoted still felt Sethraliss' presence and believed that she would one day be returned to them.[6] When Vorrik returned to his personal sanctum years later, he could still feel the ancient power of Sethraliss there, which he took as a sign that his loa endured.[7]

General Jakra'zet of the Zanchuli Council allied with Korthek, and though Korthek was slain Jakra'zet successfully stole the keys to Atul'Aman and completed the ritual to revive Mythrax by sacrificing himself. The sethrak needed Sethraliss more than ever before, but although she should have been reborn by now, someone or something in the Temple of Sethraliss had prevented her awakening. The adventurer sent by Vorrik to investigate[8] found a group of Zandalari who sought to corrupt her into a dark loa that would lay waste to Vol'dun.[9] The trolls were defeated and Sethraliss was rejuvenated, after which her avatar joined the Devoted at the Sanctuary of the Devoted.

In densest jungle of darkest green,
Rules mother of many, but rarely seen.
Warm and lush and full of life.
Iron will and without strife.


Her mind unfurls, envelops all.
Her faithful ever heed her call.
Across de ages her eyes do see,
Seeking de best for you and me.


Through darkest night, and brightest day,
She will ever find her way.
In her, ya haven will be found.
Her all for us, her care profound.


Love unsurpassed will surely be,
When Sethraliss ya truly see.[10] 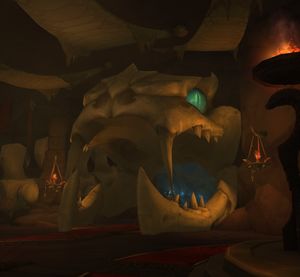