Settlements are areas were people gather to live, going from small villages of a couple of dozens of people to bustling cities of thousands of souls.

Cities are large settlements were people live that are usually much bigger than towns. Normally surrounded by tall walls, cities are protected by their own armies, especially if it is the capital of a nation. It has multiples services, though not always included in all cities, such as banks, flight paths, inns, auction houses and much more. As of patch 1.9.0, all faction capitals should have an auction house.

In Warcraft III "Cityscape" is a tileset used in single-player and on custom maps.

Temple cities are usually very large settlements where many temples dedicated to a single or multiple deities can be found. 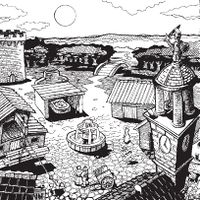 Villages or towns are not large enough to be cities but they have a good amount of buildings and citizens. The distinction between a town and a small settlement can be fuzzy though towns usually have some vendors and flight paths but no banks or auction houses. Inns are often found in them, but it is not a guarantee. Settlements can be found along the roads toward raids, cities and other regions. Other names include hamlets etc. In human lands, its denizens are known as villagers.

In Warcraft III "Village" and "Village Fall" are tilesets used in single-player and on custom maps.

The term village is sometimes used interchangeable with "town"[1] or even "city".[2] Villages can vary greatly in terms of population; some have as little as 80 residents,[3] while others have 2000 inhabitants.[4][5] The city Dolanaar is also referred as a village and has 5,000 inhabitants.[2] Farming villages are used to produce great quantities of goods.[6]

Camps are small settlements that lack any significant building, though they normally have a flight path. Sometimes, if they are big enough, camps can have forges and other profession buildings. Lots of different races have camps scattered all around Azeroth. Other names include posts, or forward camps. Tents may be used to set up a camp.

They range in population from 50 to 3000. This would put them in the population range of many villages.[7] [8]