Sezahjin is a Zandalari troll cook and quest giver located at the Scorched Sands Outpost in Vol'dun. He has a young apprentice named Junji. He claims to have once been the personal chef of General Jakra'zet before he was wrongfully exiled. According to Jani, he is also the former chef of King Rastakhan,[1] presumably before T'sarah held the position of Royal Chef. 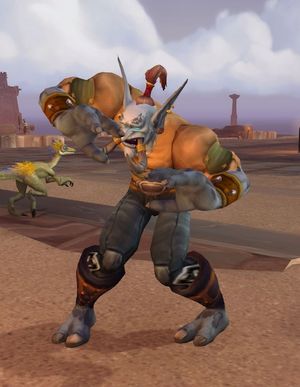 Sezahjin after having his hat stolen during

Gossip
Quality ingredients are not easy to find in Vol'dun, but if you eat quickly and close your eyes da food doesn't taste as bad as you'd expect!

How did you end up in Vol'dun?
You're obviously not from Zuldazar, or else you'd know exactly who I am. I was General Jakra'zet's personal chef!
I was exiled after de general became ill eating one of my meals... but it wasn't my fault!
De other cooks envied my position! One of dem must have poisoned de meal when I wasn't looking!
Someday, I'll find a way to prove my innocence, but for now, I have to cook dung beetles to survive.