“I shudder at the thought. An ancient evil. An enemy of Pandaria. I will not speak their name.”

The sha (known as ikk to the hozen)[3] are physical manifestations of negative emotions — such as doubt, despair, fear, hatred, or anger — found in Pandaria.[4][5] These malevolent spirits were spawned from the essence of the Old God Y'Shaarj after it was slain by the titan Aman'Thul and its remains fell back on the land that would later be called Pandaria.

For thousands of years, the sha lay relatively dormant below Pandaria, but the arrival of the Alliance, the Horde and their war on Pandaria's shores caused the sha to once again rise up to threaten the land. However, since the Heart of Y'Shaarj was drained of its last remaining power during the Siege of Orgrimmar, the sha will eventually cease to be.[6] 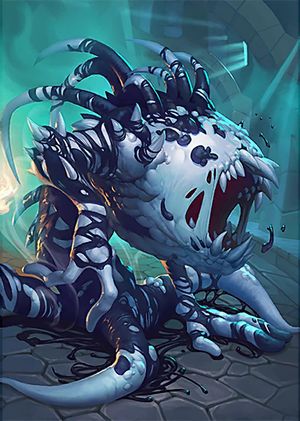 When the titans and their armies fought the Black Empire, Aman'Thul had to slay the seven-headed Old God named Y'Shaarj by tearing it out of the planet's crust and ripping it apart. However, its remains fell back on the land that would one day become known as Pandaria, and its essence would spawn the sha.[7] Due to the efforts of the pandaren Song to spread peaceful and harmonious teachings in the years following the pandaren revolution,[8] the sha mostly lay dormant within Pandaria for many thousands of years, with only the lesser sha known to have ever manifested at this time.[7]

Ten thousand years ago, Shaohao, the last pandaren emperor, sought to save Pandaria from the impending Great Sundering. To protect his people, Shaohao undertook a grand quest to strip away his own negative emotions. He succeeded, and the doubt, anger, fear and still more that he plucked from himself was imprisoned beneath the earth. But it did not lie still. It seeped into the very land Shaohao hoped to protect. In the heart of Pandaria, Shaohao's darkness – the Sha – waited, feeding off every harsh word, angry fist or pang of despair.[9][10][11][12][13]

The pandaren have trained themselves in compassion, patience, and love of life in order to limit their contribution to the power of the sha, but with the arrival of violent outsiders on Pandaria, all their care may be for naught. It is not clear if the sha have an agenda, but there is no doubt that they exist in disharmony with life. Wherever they lurk, they bring and delight in discord and death in a cycle that seems difficult for even the greatest heroes to end. Swords cannot slash doubt. Armor cannot deflect hatred.[14]

Unwary mortals can also become possessed by negative sha energy, becoming embodiments of pure anger or fear.[4] Individuals turn black and white and may gain other sha-like features such as sha arms or masks. It is possible to reverse sha transformation in the beginning stages, as Rell Nightwind and Nazgrim were both possessed but saved from such a fate by Taran Zhu. It is also possible for an individual to completely transform into a sha, like Ga'trul and Doren do.[15]

The sha maintain a very big presence in the Dread Wastes, the homeland of the mantid race. Due to being possessed by the Sha of Fear, the mantid queen Grand Empress Shek'zeer initiated the mantid swarm a decade too early, and many of the sacred giant kypari trees of the wastes have begun dying due to being infested with sha energy.[16]

Recent developments in the Alliance-Horde war have led to attempts to harness the sha as a weapon against the opposing force, unaware of the potential danger it poses to its very users. After Garrosh Hellscream arrived in Pandaria he began experimenting with the sha he found in the mountains of the north, believing that the sha could strengthen his soldiers. The results, however, were quite the opposite. His troops began erupting into random violence,[17] and it was later revealed that the sha control those who try to use it directly, rather than the other way round.[18]

After the last of Y'Shaarj's power was consumed by Garrosh in the Siege of Orgrimmar, the Wild God Yu'lon stated that the sha would eventually fade from existence.[6] However, some sha remnants still exist at Shado-Pan Monastery during the third invasion of the Burning Legion.[19] 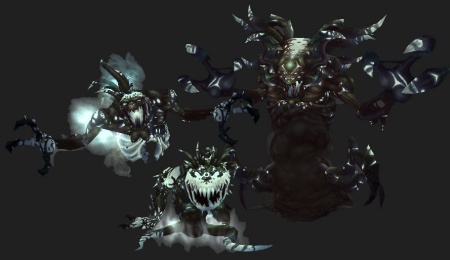 The sha's strength is mostly determined by their size; the larger the manifestation the more powerful they have become. In World of Warcraft three models are used to represent them: lesser weak ones, medium-strong ones, and large powerful ones. The latter are the 'main' sha aspects of negative emotions.

Most of the sha and the energies associated with them are monochromatic, the exceptions being the Sha of Fear, which is a mixture of dark purple and red, and the Sha of Pride and its associated spawns, which are more blueish in tone rather than black or gray.

The sha minions created directly by the Heart of Y'Shaarj (both inside and outside his realm) are a bit more violet in tone in addition to their original monochromatic forms, signifying their infusion with the Old God's power.

Sha-lings reflect the emotional state of their handler, becoming agitated, depressed, fearful, or doubtful depending on the magnitude of negative thoughts around them.[20]