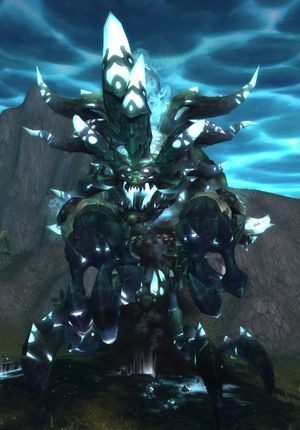 Sha of Anger in Kun-Lai Summit

Sha of Anger is one of the seven prime sha, and a world boss found in Kun-Lai Summit. It drops Arena season 12 rewards and tier 14 set items.

It took a raid of roughly 40 level 85 players to take down the Sha of Anger. The sha originally appeared in one of five possible areas of the zone, each spawn point coming with its own minions surrounding it.[1] As of Patch 7.2.0, it only spawns at the Burlap Trail point and respawns 15 minutes after it was previously defeated.

Ten thousand years ago, Emperor Shaohao, free of his doubt, despair, and fear headed into the Kun-Lai Summit to gather the Shado-Pan in order to fight the oncoming Burning Legion which would soon be upon them. Xuen sensing a great darkness within Shaohao and challenged the emperor to hit one of his warriors: if Shaohao managed to do so the army would be his to command. Shaohao grew furious as he tried and tried but failed to land a single blow, and the Sha of Anger burst forth from him, followed by the Shas of Violence and Hatred. One the Sha surged toward Shaohao, but at the last moment he was saved by a Shado-Pan warrior, making the ultimate sacrifice. This act taught the emperor a lesson of fellowship, love, and peace.

The Sha of Anger, the physical manifestation of rage, has escaped from the Shado-pan Monastery in Kun-Lai Summit. Amid the brutal conflicts gripping Pandaria, the dark entity has grown ever more powerful. Recently, the sha has been seen wandering Kun-Lai, using negative energies to corrupt everything the being encounters.

The Sha of Anger's rage grows over 50 seconds.

Clear nearby hostile creatures before pulling. The fight is in two phases that don't differ dramatically. In phase one, he gains 2 rage per second up to 100. It is crucial to target any mind controlled players at all times to remove Aggressive Behavior applied during this phase. When he reaches 100 rage, he transitions to phase two and gains Unleashed Wrath, placing a heavy burden on the healers. Tanks should make sure one of them is in melee range of the boss at all times to avoid a wipe from Seethe, while other players should spread out with 5 yards spacing to avoid Endless Rage and Growing Anger. Finally, avoid clouds of Bitter Thougths and AoE the Ires produce by Endless Rage. The raid has 15 minutes to finish the fight before a hard enrage.

Aggro
Yes, YES! Bring your rage to bear! Try to strike me down!

Growing Anger
Feed me with your ANGER!

Unleashed Wrath
My fury is UNLEASHED!