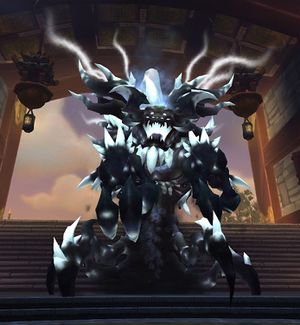 The Sha of Doubt in the Temple of the Jade Serpent

The Sha of Doubt is one of the seven prime sha.

All mortals have doubt, and the Sha of Doubt makes them resonate within, paralyzing its victims and killing the soul.[1] Tyrathan Khort described the Sha of Doubt as ripping its victims wide open, making them doubt their worthiness to live and even their own minds. The sha would leave them unable to make a decision because it would convince them that each choice was wrong.[2]

Ten thousand years ago, a vision of the Burning Legion raining down and of the great Great Sundering weighed heavily on Emperor Shaohao. He doubted his capacity to stop this disaster and believed he could not do it alone, leading to the manifestation of the Sha of Doubt. Shaohao was nearly overtaken by doubt until he remembered the words from Yu'lon and looked to the land for answers. He saw that reeds that fought against the wind broke, while the ones that bent with the wind endured and prospered. The emperor realized what he must do and turned his back on doubt. This caused the sha to vanish.

The Sha of Doubt was released at Serpent's Heart during the conflict between the Horde and the Alliance aided by their newest members the Forest Hozen and Pearlfin Jinyu.[3] Temporarily defeated by a hero, the sha made its way to the Temple of the Jade Serpent as the final boss.

The physical manifestation of suspicion was trapped in the Jade Forest after Emperor Shaohao defeated the entity 10,000 years ago. The Sha of Doubt then grew obsessed with the Jade Serpent--Yu'lon, the Spirit of Wisdom and Foresight--and now delights in the thought of corrupting her home.

Before engaging the Sha of Doubt, the entire party should make sure, including ranged attackers and the healer, to move inside. The gate will close once the encounter starts, locking those far enough from the Sha out of the fight.

The fight itself is mostly a standard tank and spank, except for the Figments of Doubt phase. Periodically, the Sha will make each player fight a shadow copy of themselves, which can overwhelm the less sturdy party members, especially the healer. The simplest strategy here is to kite all figments of doubt together and let the tank gather aggro on them all at once.

The Sha is invulnerable while at least one figment of doubt is alive. Once they are all killed, the fight proceeds as normal again until the next figment phase.

Aggro
Die or surrender. You cannot defeat me.

Wipe
All is lost.