The Sha of Fear is one of seven prime sha. It was sealed by Emperor Shaohao in ancient times. The sha primes were freed by the Alliance-Horde war arriving in Pandaria. The Sha of Fear escaped its prison in Niuzao Temple and proceeded to corrupt the Mantid of the Dread Wastes. After Klaxxi-aligned adventurers killed Grand Empress Shek'zeer, the Sha prime retreated to the Terrace of Endless Spring.

The Sha of Fear is the fourth and final boss of the Terrace of Endless Spring as well as the end encounter for Tier 14. During the fight, the raid group will periodically be forced apart to battle both the Sha of Fear and its Terror Spawn adds, and the Shadows of the Golden Lotus. On heroic, the raid must contend with the Sha of Fear and even more dangerous adds as it drags the raid down into its home turf. 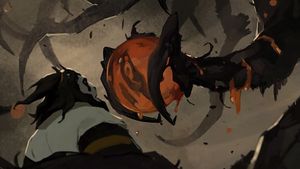 Sha of Fear in The Burdens of Shaohao

While traveling through the Dread Wastes, the Monkey King got stuck in the vines of a tree. Emperor Shaohao was paralyzed by fear as dangerous mantid started approaching his captured friend. Remembering the words of Niuzao, Shaohao braved his fear, and smashed the kypari tree. Giants blobs of sap fell onto the mantid and glued them to the ground, allowing him to free the Monkey King.[1]

Soon after rising from his prison, the Sha of Fear takes control of the mantid empress and essentially becomes the ruler of the Dread Wastes. After escaping when the empress is killed, he challenges the heroes to meet him at the Terrace of Endless Spring in the Veiled Stair, where he is the final boss.

The Sha of Fear is the physical manifestation of terror in Pandaria. Imprisoned by the legendary pandaren emperor Shaohao long ago, the entity has been newly strengthened by rising conflict across the island.

The Sha of Fear looms atop the terrace, attempting to consume the pure light still emanating from its center. He goes Berserk after 15 minutes. This timer resets to 10 minutes the moment the Sha retreats to the Dread Expanse.

The Sha periodically summons a pair of Terror Spawns to attack players. Each Terror Spawn is protected by a bulwark of dark energy that deflects spells and attacks that strike the front of the creature.

The group of players transported by Ominous Cackle must defeat one of three Sha possessed crossbowmen. The pandaren Yang Guoshi, Cheng Kang, and Jinlun Kun are former terrace guardians.

On heroic difficulty the Sha of Fear retreats to the Dread Expanse at 66% remaining health, dragging players along with him. This watery wasteland is a place of the Sha's making where he has access to a new set of abilities.

This creature fixates on the current champion of the light. If a new player becomes the champion the Dread Spawn will change targets.

The tank active on the boss will need to keep an eye out for when Thrash is coming up. Active mitigation abilities should be timed for Thrash, particularly on heroic.

The adds (Terror Spawns) are shielded from the front and can therefore only be attacked from behind. DPS will need to venture outside the Wall of Light safe zone to deal with them before they overwhelm the raid by sheer numbers. However, it is critically important that DPS keep an eye on the Breath of Fear timer and make it back to the Wall of Light before Breath of Fear is cast, as anyone caught outside will likely die.

Players should spread out at least 3 yards to prevent splash damage from Eerie Skull. Penetrating Bolt from the Terror Spawns can be easily side-stepped so long as the Terror Spawn numbers are kept under control.

Ominous Cackle will always send one tank, one healer and three DPS (chosen randomly) to one of three Outer Shrines (the Outer Shine strategy is detailed below). This places the following constraints on raid composition:

The group sent to one of the Outer Shines will be faced with a Sha-posessed pandaren, and must defeat him before Ominous Cackle removes the last remaining tank from the Terrace (failing which, Reaching Attack will start wiping the raid). In LFR and 10-man, the group will have 90 seconds. 25-man groups running with three tanks will also have 90 seconds, but will have only 45 seconds if the group decides to run with only two tanks (which requires the group to have insane DPS).

Besides the typical duties of tanking and spanking the pandaren, the group on the shrine must vacuum up the Sha Globes before they return to the pandaren and heal him up. This is less important on LFR (each globe will heal for 2%), but is significantly more important on normal (5% healing), and is pretty much mandatory on heroic (8% healing). The Sha Globes do minor damage to the player vacuuming them up, so players should be careful not to vacuum up any Sha Globes if their health is low.

Death Blossom can easily kill unprepared players, particularly on heroic. The three DPS and the healer should line of sight Death Blossom behind the pillars on the edge of the shine, while the tank pops a cooldown, eats the damage, and continues to vacuum the Sha Globes. Death Blossom damage is Physical, so the tank should be able to eat the damage without too many problems.

Once the pandaren is defeated, the group can click a portal to return them to the main fight on the Terrace. The returning group will receive a buff (Fearless) which gives them increased damage, increased movement speed, increased healing, and complete immunity to Breath of Fear for 30 seconds; consequently, the three returning DPS players should use this opportunity to mop up the Terror Spawns on the main platform (the returning healer can head straight for the Wall of Light, and the returning tank needs to head for the Pure Light puddle in time to take over tanking the boss on the following Ominous Cackle cast). They will not need to worry about running into the Wall of Light to avoid Breath of Fear while they have the Fearless buff, but it is important that they monitor how much time remains on their buff so that Breath of Fear does not catch them out after the buff duration ends.

Intro
Your lights will go out. The darkness will envelop you. And you will fear the shadows that move within it.

Aggro
You will know fear!

Ominous Cackle (last 2 quotes are the same by all 3.)

Killing a player
Drown in terror.

Heroic mode
You think it is so easy to vanquish your fears?

Submerge
Dread rises! It seeks the light. It hungers.

Huddle in Terror
Huddle in terror!