Sha of Hatred is the primary antagonist of the Shado-Pan quest chain in Townlong Steppes. 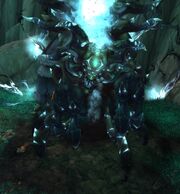 Sha of Hatred appears after his bait is killed.

Ten thousand years ago, Emperor Shaohao, free of his doubt, despair, and fear headed into the Kun-Lai Summit to gather the Shado-Pan in order to fight the oncoming Burning Legion which would soon be upon them. Xuen sensing a great darkness within Shaohao challenged the emperor to hit one of his warriors, if Shaohao managed to do so the army would be his to command. Shaohao grew furious as he tried and tried but failing to land a single blow, the Sha of Anger burst forth from him, followed by the shas of Violence and Hatred. As one the three sha surged toward Shaohao, but at the last moment was saved by a Shado-Pan warrior, making the ultimate sacrifice. This act taught the emperor a lesson of fellowship, love, and peace.

Sha of Hatred first possessed Taran Zhu, lord of Shado-Pan Monastery. And after Taran Zhu was freed of its influence, the Sha escaped to Townlong. It took advantages of Suna Silentstrike after her husband was slain by the yaungol, possessing her and further corrupting Hatred's Vice, making the yaungol kill each other. Taran Zhu led a hunting party and tracked it down, finally defeating it in Sik'vess Lair.

The Sha of Hatred is involved in the following quest in the Shado-Pan Monastery:

...and in the Townlong Steppes: 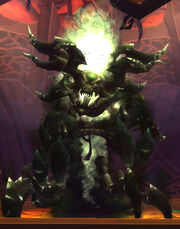 While possessing Taran Zhu
Taran Zhu and the Shado-Pan are MINE. Come forward and die by my hand, as all who oppose me shall in the days to come!

At Hatred's Vice
Ahahaha... you pitiful weaklings!
Even your strongest warriors succumb like lambs to the slaughter.
Your turn will come. Hate will turn you all against one another until this whole world burns.

At Sik'vess Lair
Come, lambs... come and face your demise!
The hatred inside you drives your hunt for me. You are already mine.
Give in. The more you fight, the more your hatred broils within you.
Everything that you are is MINE to destroy!