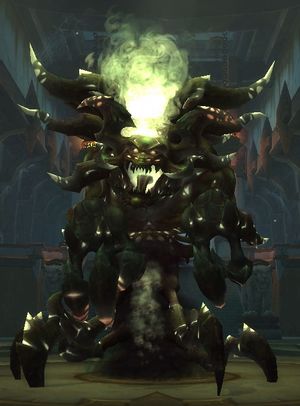 Sha of Violence in Shado-pan Monastery

The Sha of Violence is one of the sha primes sealed away by Emperor Shaohao beneath the Shado-Pan Monastery along the Sha of Hatred and Sha of Anger. Unlike the other two, it was unable to escape the monastery before being slain.

Ten thousand years ago, Emperor Shaohao, free of his doubt, despair, and fear headed into the Kun-Lai Summit to gather the Shado-Pan in order to fight the oncoming Burning Legion which would soon be upon them. Xuen sensing a great darkness within Shaohao challenged the emperor to hit one of his warriors, if Shaohao managed to do so the army would be his to command. Shaohao grew furious as he tried and tried but failing to land a single blow, the Sha of Anger burst forth from him, followed by the shas of Violence and Hatred. As one the three sha surged toward Shaohao, but at the last moment was saved by a Shado-Pan warrior, making the ultimate sacrifice. This act taught the emperor a lesson of fellowship, love, and peace.

Bloodthirsty, ruthless, and savage, the Sha of Violence is unfettered within the Shado-pan Monastery. Feeding on the Horde and Alliance's brutality, the entity gleefully ravages the monks who struggle to impede the monstrous onslaught.

He'll cast Smoke Blades for the most part for no crit whatsoever. Sha Spike happens quick at anytime, so dodge if possible and/or heal that person asap. Lastly, dispel Enrage when cast.

Aggro
I will not be caged again. These Shado-Pan could not stop me. Neither shall you!

Killing a player
Another violent death...