Not to be confused with Iskar or Isfar.
For the encounter in Hellfire Citadel, see Shadow-Lord Iskar.

Shadow-Sage Iskar is an arakkoa formerly cursed by Sethe to be broken and flightless. He lead his fellow Arakkoa Outcasts in the battle against Rukhmar and her Adherents. He later accepted an offer by Gul'dan to regain his flight using demonic magic in exchange for servitude to the Shadow Council. Iskar claims that he was born into the lowest caste in arakkoa society,[1] although this is a lie; he was actually a priest of the Adherents before his fall.[2] 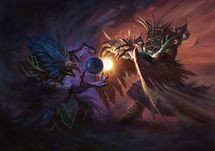 Adherent Iskar was a sun-sage of Skyreach. When he was young, he was paired as a clutch-brother to Adherent Viryx, to watch and learn from her as she learned from and watched him. He excelled greatly at the scholarly arts, yet was never the most promising of sages. He did however have a strong faith in Rukhmar and the High Sage, as did all Adherents. He was always hunched and small for his age, and didn't have many other allies other than Viryx, who was his greatest friend.

Viryx was very promising and highly regarded by the upper class of Skyreach. She managed to get away with being late or disobeying orders, and due to the connection between her and Iskar, Iskar was punished also, usually worse. Iskar resented this and wished Viryx would stop breaking so many rules and see things from his perspective, yet he was still good friends with her as she was always stood by his side and protected him. One day Viryx was late to the dawn-ritual, and thus she and Iskar were punished to clear out ravager dens below Skyreach. During their clearing out of the nests, Iskar attempted to convince her to return to Skyreach as they would soon be late. Viryx however refused, and they flew towards Veil Akraz in pursuit of more ravagers. Iskar tried to convince her to turn back as they were getting near to the homes of the Outcasts, when Viryx noticed a mysterious Adherent that was walking among the Outcasts. Iskar waited as Viryx went to investigate. He was later escorted back to Skyreach by bladetalons who had followed them.

In Skyreach he was tortured with Rukhmar's Tail as punishment. After which, High Sage Zelkyr instructed him to spy on Viryx for him. Iskar agreed, despite feeling that it was wrong. He followed Viryx in secrecy, and watched as she studied deep into tomes in the Great Archive. When she left, he checked the tomes she was reading. Using a technique an elder Adherent taught him, he managed to find the page she was reading, which was on Terokk.

This in itself was no cause for alarm. Yet for the next two days, he watched her constantly. She never did return to the Great Archive, but did spend many hours alone in her roost. Afraid that he might appear suspicious, he did not spy on her during those hours. Her secrecy was concerning to him. He wondered if her reclusive nature was a sign of the curse.

During his meeting with High Sage Zelkyr to report on Viryx, he chose to lie to him and state that Viryx was more studious than ever. After this, he flew to confront Viryx and discover what she was hiding. He told her of how the High Sage asked him to watch her, and that he lied to the High Sage. Viryx then told him of how all texts on Terokk were exactly the same. Iskar tried to explain it as historical accuracy, but Viryx was convinced it was fabrication. After Viryx responded harshly to him, he left.

He later went to the exiling of Adherent Ikiss, where he noticed that Viryx was missing. He guessed that she went to Veil Akraz, and he flew after her. After finding her there consorting with the Outcasts, they returned to her roost, where Viryx showed him the scroll that she had retrieved that proved the origin of the curse and the true history of Terokk. Iskar then realized that everything he had known was a lie. A cold anger grew within him. All his life he had followed with blind faith, accepting punishments and torture, all to stay in Rukhmar's eyes, without realizing that the cause of the curse had nothing to do with staying in Rukhmar's favor. Iskar told Viryx that they had to seek out more information, that they should hide the scroll. Viryx insisted to his surprise that they needed to destroy it. Iskar tried to explain to her that they couldn't hide the truth; that it would lead to a new world for the arakkoa. Viryx took the scroll from him, claiming that keeping Skyreach as it was was worth the hiding of the truth. She then burnt the scroll. Immediately after two bladetalons broke in, along with High Sage Zelkyr, who explained that he had been watching both of them, wanting to see what they would do with the information. After both were captured, Iskar was locked in a heatless and lightless cage, awaiting exile. When he was allowed to see, he noticed that the person who would strip him of his wings was Viryx. He simply stared at her with anger. The High Sage gave Viryx a choice, Iskar or Skyreach. Viryx made her choice, and cut off Iskar's wings. He was then banished to Sethekk Hollow. He later rose through the ranks of the Outcasts and became their leader. 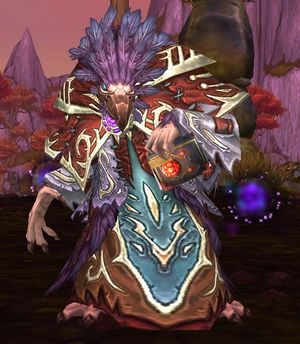 Iskar first appears in Talador, in the draenei town of Aruuna disguised as a draenei woman named Raksi. He informs a nearby adventurer that the draenei found an Apexis artifact in the nearby Aruuna Crystal Mine, and the Adherents have attacked Aruuna to claim it. When the Ancient Prism is located, Iskar drops his disguise and has it destroyed so that the Skyreach arakkoa won't use it. He takes the adventurer to Terokkar Refuge, where he asks them to free his fellow Outcasts from the Adherents' wrath in Veil Shadar.

Iskar later appears at Veil Terokk, deep in the woods of the Spires of Arak, where he works with Reshad. He sends Outcasts to find the Adherents at the Apexis Expedition, and asks the adventurers to bring back the remaining Talonpriests in order to bring Terokk back.

Although Iskar wants to bring Terokk back physically, Reshad is concerned that Terokk will lead the arakkoa further into darkness and does not want to repeat the mistakes of the past. Instead, Terokk imbues an adventurer with his power after a battle in order to face off against Kargath Bladefist. Afterward, Iskar expresses anger that arakkoa magic was used by an outsider.

Iskar is later seen in Skyreach, helping to lead adventurers in to take down his former friend Viryx.

After the Adherents of Rukhmar fall and the Order of the Awakened is founded, Iskar disappears, unable to accept a balance between light and shadow. When scouts are sent to find him, he murders them.[2]

Iskar accepts an offer from Gul'dan to travel to Tanaan and assist the Shadow Council in exchange for a cure to the Curse of Sethe. He allies himself with the remnants of the Sethekk gathering there, who have been left masterless after the death of their god, and several power hungry High Arakkoa also dissatisfied with the Order of the Awakened. Taking the Ruins of Kra'nak as a base, he begins searching for the Cipher of Damnation. When he finds it, Gul'dan fulfills his promise and restores Iskar's wings. The newly elevated Shadow Lord Iskar is then tasked with raising an army of felsworn Arakkoa like himself to serve the Shadow Council. Later, the Order of the Awakened and Reshad catch up with him and discover his betrayal of their people. He is eventually found and killed in Hellfire Citadel along with his army of traitorous Arakkoa.

The Talon King's power belongs to the children of Skettis.

Reshad should never have shared it with an outsider...