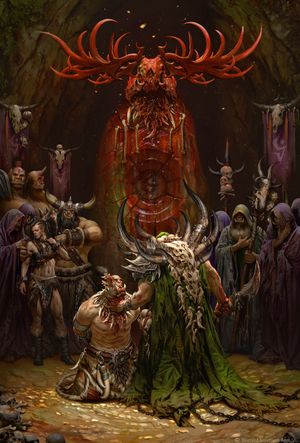 The Shadow Council lording over Ner'zhul.

The Shadow Council is a group of mortal warlocks that serve the demons of the Burning Legion.

When Gul'dan supplanted Ner'zhul as Kil'jaeden's favorite pawn, he began to reorganize the clans into a single engine of destruction. To this end, he promoted a public figurehead, Blackhand of the Blackrock clan to the new position of Warchief. Though Blackhand was cunning, he lacked the loyalty to Kil'jaeden and deviousness needed to drive the Horde. Thus, Gul'dan secretly brought together a collection of warlocks, necrolytes, chieftains, and even the occasional ogre into a clandestine council — the Shadow Council.

The original purpose of the Council was to ensure the stability of the Horde in their quest to destroy the draenei, manipulate the clans and spread the use of warlock magics. When the time came, the Shadow Council fed the blood of Mannoroth to the clans, apart from the Frostwolf clan (whose chieftain, Durotan, forbade them from partaking) and a few other individuals.

The Council made their headquarters at the Black Temple and oversaw the destruction of the draenei until Kil'jaeden mysteriously vanished. As the Horde began to fragment, the Shadow Council was contacted by Medivh, who offered a new world to plunder.

To test the potential of the daggers Anguish and Sorrow, Gul'dan gave them to his assassin Garona Halforcen and ordered her to use them against an unfortunate Shadow Council acolyte. The acolyte had no chance to defend himself before she tore open his throat with one slash. When the orc took his last breath, the wound that killed him became irregular. Nobody would be able to tell whether he had died to a knife, an axe, or a spear. Gul'dan saw the possibilities immediately. A mysterious death could be used to sow confusion and redirect suspicion wherever he pleased.[2]

The Shadow Council operated a number of the Horde's workings during the war effort against the Kingdom of Stormwind. But their time was near.

Following the death of Medivh, Gul'dan was incapacitated for several weeks. During this time, Orgrim Doomhammer killed Blackhand the Destroyer and seized the mantle of Warchief. King Llane Wrynn was assassinated by one of the Shadow Council's finest killers, Garona. Orgrim captured and tortured Garona to learn of the location of the Shadow Council on the run, and sensing it threatened his position, launched an attack on Gul'dan's citadel near the ruins of Azeroth, annihilating most of the warlocks of the Council. Their spirits were subsequently imbued into the death knights,[3] while the magical energies of other long dead warlocks were infused into the bodies of the ogre magi.[4][5]

The Shadow Council has set up its main base in Shadow Hold in Felwood. There they reign with massive force and numbers. The Burning Blade is active in Desolace, the Barrens, and Durotar, and even have a spy in Orgrimmar, while the Searing Blade dwells beneath the orcish capital in the Ragefire Chasm. The Cult of the Dark Strand operates in Darkshore and Ashenvale and the mysterious Argus Wake manipulates the Syndicate in Alterac and the Arathi Highlands.

It is known that some of its members, including Vorpil and Blackheart, survived by hiding in Auchindoun. The Cabal acts from within Auchindoun, but members of the Shadow Council are widespread all over Outland.

During the Opening of the Dark Portal in the Caverns of Time, members of the original Council can be seen.

While some members are missing after the Cataclysm and the Cult of the Dark Strand was wiped out by the Horde, the rest of the Council in Felwood appears to be undamaged and active.

An alternate Gul'dan rallies the members of the Shadow Council who have been in hiding to help him retrieve the Book of Medivh and Eye of Dalaran. Jergosh the Invoker leads a team to obtain the book from the Cult of the Damned at Caer Darrow, while Allaris Narassin and Nagaz go to Tol Barad for the eye. All three are killed by a warlock adventurer.

Lord Malgath and several Shadow Council assassins assisted the demons in breaching the Violet Hold. Later, several of their warlocks were seen aboard Kil'jaeden's command ship.

The hold of the current Shadow Council is extensive; they control cell-based organizations throughout Kalimdor including the Burning Blade and Searing Blade cults, which utilize the powers of the

[Demon Seed]. Agents of the Council have even infiltrated areas of the Orcish capital city of Orgrimmar. It is also revealed from a questline in Darkshore that the Cult of the Dark Strand is another branch of the Shadow Council, and certain clues, like Argus Wake members they employ, Marez Cowl, and Darbel Montrose, lead some to believe that the Syndicate may be affiliated, if maybe loosely, with the Council. The Shadow Council is also present at Jaedenar in Felwood, Grangol'var Village in Terokkar Forest, and Kil'sorrow Fortress in Nagrand. Its headquarters are in the Shadow Labyrinth of Auchindoun.

“Many cults exist within the Council, but only to hide its actions against the foolish. Groups like the Burning Blade, the Argus Wake, and the Searing Blade are tools of the Council. Consider them one and the same.”

Note that most Shadow Council members are orcs; although they worship demons, most of them are not fel orcs.

While it may be a simple case of model reuse, the Founding of Durotar campaign shows some Stormreaver warlocks on the Echo Isles and Durotar. It is, therefore, possible that some Stormreaver survivors traveled to Kalimdor and founded the local branch of the Shadow Council.