Shadow Priest Sarvis is a level 5 quest giver located in Deathknell in the Forsaken starting zone of Tirisfal Glades.

No other race on Azeroth has suffered as much as our people, <class>. To laugh in the face of death has become second nature for all of us. 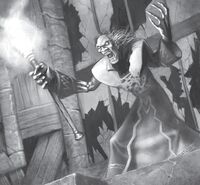 Shadow Priest Sarvis in the RPG.

He is the leader of the Cult of the Forgotten Shadow in Deathknell (one of the cult's two major bases). As a dark priest he is like an archbishop, ruling over a wide territory. Shadow priests serve as bishops for communities under him.[1]