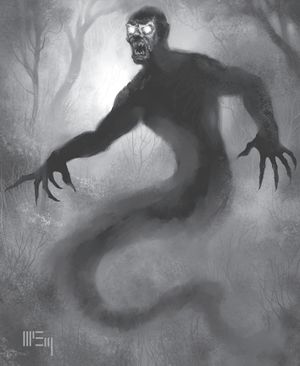 The Forgotten Shadow is a powerful religion that sweeps through the Forsaken. A devotee may throw off the shackles of their zombie-like body, becoming one with the Shadow. Those who succeed become shadow ascendants. Outsiders do not understand the process that fuels the ascendant's evolution from a physically powerful but slow corpse to a quick and deadly shadow. The Cult of Forgotten Shadow, however, preaches that all Forsaken are born from the Shadow and that they carry a portion of the Shadow within them. By strengthening their ties to death and undeath, the ascendant manifests their inner Shadow, bonding with it until they become a living shadow, the ultimate manifestation of the Shadow from which they were born.

As the Forsaken undertakes their journey, many changes manifest. The Forsaken's skin darkens, and shadows cling to their body. Their features blur and become indistinct, almost as if they were melting away. The ascendant becomes more sensitive to light, preferring to stay in darkness. Later, the air becomes cold around the ascendant. Their voice echoes, as if they speak both words and thoughts. The ascendant becomes one with darkness and shadows, and they feel their emotions grow colder and darker as they continue down this path.

At the culmination of this path, the ascendant's body fades, and they become a living shadow. While the Forsaken loses the strength of an undead body, they gain the perfection of undeath, an incorporeal and inhumanly powerful free soul. This form resembles their old form, but without facial features. Hair and body shape remains, formed of the stuff of shadows, and eyes remain as burning balls of unholy light. The Forsaken still has a body, however, and is not truly incorporeal as a ghost is. The ascendant's shadow body bears some substance, almost like an ephemeral, inky fluid, but it is so wispy that it almost doesn't exist.

As the Forsaken ascends the normal coils of undeath and transforms to an undead shadow, they grow supernaturally quicker. An ascendant can use the Stealth skill to hide even while being observed. As long as they are near some sort of shadow, an ascendant can hide from view in the open without anything to actually hide behind. They cannot, however, hide in their own shadow. A skilled ascendant can see any invisible creature and may climb any surface as though it is a spider. The ascendant can travel between shadows as if by means of a dimension door spell, the magical transport must begin and end in an area with at least some shadow. A highly skilled ascendant can cause innumerable tendrils of shadows to sprout from their body. The effect is centered on the ascendant, the tentacles don’t affect them, and the tendrils retract into their body and the effect ends.

An ascendant can attempt to drain the shadows from a creature, and through its shadows, absorb its life forces. If the ascendant pins a foe during a grapple, they drain its shadows. When the ascendant uses this ability, the victim’s shadows drain into the ascendant, and the hollows in his facial features, under his hair, and beneath his body pale into nothingness. The ascendant may use this ability to cannibalize a corpse as well, as normal, but they do not need to actually eat any flesh, while the ascendant feeds, the corpse begins to wither, until it turns to dust.

A highly experienced ascendant finally throws off the shackles of their body and becomes a living shadow. As an incorporeal undead, they no longer have the use of any mundane item unless it has the ghost touch property. They can drain shadows only from a helpless victim or a corpse, however, as they can no longer grapple corporeal foes. They retain all other abilities. The ascendant finds themself unable to stand bright lights. While in a source of bright light (whether natural sunlight or from a spell)the ascendant's attacks are weaker, they are more vulnerable to attacks, and they are less competent at their skills. Furthermore, any light-based attack (such as the holy light spells or damage from a brilliant magical weapon) deals double damage to the ascendant.[1]

Shadow ascendants in the world

Shadow ascendants, obviously, are universally Forsaken. Ascendants come from all walks of life, but most are priests, though the occasional warrior or rogue may find ascension in the Forgotten Shadow. Most Forsaken revere ascendants as the perfection of death and their own inner darkness. An ascendant is a powerful creature, a physical manifestation of the Shadow, free of mortal constraints such as a body or feelings. Shadow ascendants hold a special place in the Cult of Forgotten Shadow. Most ascendants are followers of that faith and expound that their transformations are proof of the faith's truthfulness. Ascendants attend the cult as prophets, leading clergies to the path of true undeath. Even ascendants who claim to be atheists have some knowledge of religions and faith if just to understand their own undead bodies and the Shadow from which they were born. Secretly, an ascendant must have a little faith to begin the transformation, despite how atheistic they may be.

Among the Horde, ascendants serve as nigh-invisible spies, priests, and assassins. These living shadows frighten other Horde members, but the Horde bears a measure of respect toward them. The shadow-creatures they become resemble some shaman and voodoo spirits, though dark and uncontrollable. Tauren are wary of the creatures, which exude an overpowering stink of death to the tauren's spirit-sensitive noses. On the other hand, some trolls revere those who complete their manifestations of true undeath as dark Loa spirits, and go out of their way to please ascendants.[2] 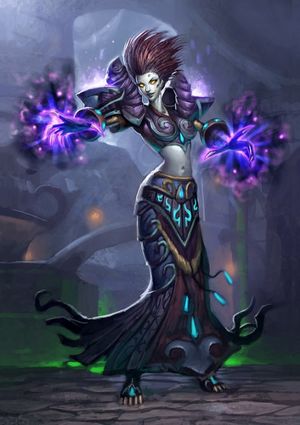 Although this is Teretha of the Undercity from the TCG, the artwork is used to represent a shadow ascendant in Hearthstone.

The Shadow Ascendant appears as a common card for the priest class in the Knights of the Frozen Throne expansion for Hearthstone. At the end of the controlling player's turn, the Ascendant gives a small buff to the Attack and Health of a random friendly minion on the battlefield. Its flavor text reads: "When you're at the bottom, there's nowhere to ascend, but up."

In the web comic Freedom, Shadowreaper Anduin can be seen sending forth his "ascendant" to "work [her] worst" by pouring her power into one of Anduin's undead soldiers, causing the creature to be transformed into a bloated monstrosity.

Notably, the Shadow Ascendant appears to represent the first time that a de-canonized concept from the RPG has been adapted for Hearthstone. However, while Freedom's depiction is in line with the Horde Player's Guide's description of a formless, incorporeal shadow, the artwork used by the in-game Shadow Ascendant card appears to depict a decidedly more corporeal Forsaken than the shadow ascendants described in the RPG.

[Cuffs of the Shadow Ascendant] could be a reference to this.

The Spellbound Ritualists that transform into Void Ascendants in Ny'alotha, the Waking City may be related to the idea of shadow ascendants.