“[...] When you became a shadow hunter, you transcended being my son. You became a father for all trolls. You bear responsibility for all of us, for what we gonna become.”

Shadow hunters (also written as shadowhunters or shadow-hunters) are masters of voodoo and shadow magic and were once the highest authority amongst trolls.[2] Their spirit powers can both heal and curse, walking the line of dark and light in hope of saving the future of trollkind, doing whatever it takes to secure a future for their kin. The loa can channel themselves through the shadow hunters when they use their ceremonial rush'kah masks.[3] The traditional shadow hunter weapon is a long double-bladed sword[4] or glaive. Females are sometimes called shadow huntresses,[5] but the title "shadow hunter" can be used by both men and women.

In the old days of trolls, even before the Zandalari Empire, shadow hunters were prominent in troll society. Sometimes they moved to the fore, while at other times they advised dynamic leaders or gathered together as a council. Their endorsement was always sought and the wisdom of their decisions was always respected. When the Zandalari began to pull away and the trolls began to gather in great cities, the shadow hunters' influence was lessened and their role had to be redefined. To complete a shadow hunter's training remains a great and celebrated thing, however. Shadow hunters are raised to be heroes of mythic proportions. They are both respected and feared since they walk with the loa and therefore cannot completely understand the needs of mortals. It was Sen'jin's dream for trollkind to once again be led by shadow hunters, as they had in the past.[2]

When the Darkspear tribe lived on the Darkspear Islands, trolls aspiring to be shadow hunters needed to enter the jungle known as First Home to be judged by the loa. In First Home, ancient spirits of those who had transcended death could give a troll second sight or drive him mad so that he would pull out his own eyes. The loa, which could grant wondrous boons or inflict terrible punishments, made judgments upon those that entered the jungle. These judgments were vicious, swift, and unpredictable. Nobody entered First Home besides shadow hunters and fools. Sometimes the shadow hunters returned, but the fools never did.[6] Now that the Darkspears live on the Echo Isles, it is unknown where the trial for new shadow hunters is held. It's furthermore unknown what the trials for non-Darkspear tribes entail.

The status of a powerful shadow hunter is shown by skulls and materials incorporated into their armor.[4] The strongest shadow hunters of the Witherbark tribe are given a special knife after completing their rites of passage.[7] If a shadow hunter happens to be taken under the captivity of other trolls, they are still revered to the extent that they're attired appropriately and are granted an ornate, sacrificial dagger to be strapped in a sheath to their upper-left arm with the intent to make them "shine like a god", as is custom. Shadow hunters are revered by the loa, and mistreating them, even under capture could lead to the displeasure of the loa.[8]

Shadow hunters are able to sense titan magic around them and in other beings.[9]

Shadow hunters can be found in areas with high troll population such as Zul'Farrak and Sunken Temple.

It was revealed that Vol'jin had an elite shadow hunter group known as the Siame-Quashi who assisted him on his assault of Zul'Gurub and Zul'Aman.

A number of shadow hunters accompanied the Horde and are seen in the various areas of the alternate Draenor, serving as Warchief Vol'jin's eyes and ears in a manner similar to the Alliance's SI:7.[10]

In Warcraft III: The Frozen Throne

A shadow hunter in Warcraft III: The Frozen Throne.

These reclusive, wily jungle trolls are considered to be the highest authority within their respective warbands. They are masters of voodoo magics who can use their spirit-powers to both heal their allies and place curses upon their hapless enemies.[3] Donning their ceremonial rush'kah masks -- that channel the spirits of their dark gods --[11] the Shadow Hunters walk the line between darkness and light in hopes of salvaging the future for their savage brethren.[3]

Shadow hunters can cast Chain heal, turn enemies to harmless critters with Hex, summon ward to assist him in battle, and point-blank area of effect spell that turns allies around shadow hunter invincible. 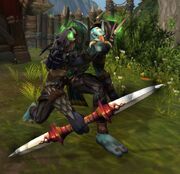 Like other practitioners of voodoo, shadow hunters deal with the darker aspects of the spirit world. Unlike witch doctors and members of other professions associated with this ancient faith, shadow hunters claim to develop a special bond with voodoo spirits called the Loa. Able to channel the essence of some of these extremely potent beings - and often acting with their blessing - shadow hunters gain special abilities only the Loa can grant. As they grow in experience, the shadow hunters' bond with the Loa strengthens and their connection to these powerful voodoo spirits eventually gives them the ability to curse and heal at a whim.

Brave practitioners of rituals and dark rites, shadow hunters tread a cautious line between darkness and light. Often misunderstood but always respected by those who have witnessed their eerie powers, shadow hunters rely on faith in the Loa and the ability to communicate with them. Through the magic of prayer and ritual, a shadow hunter spends a lot of time maintaining the particular relationship he shares with the Loa.[12]

Roughly spoken, shadow hunters are former headhunters who have gone deeply into the arts of voodoo and Loa. However, they have not forgotten their hunting skills, which makes a shadow hunter very dangerous in combat. They can stand far away from their enemies while throwing weapons at rapid speed, track down enemies with ease, and also heal themselves and allies. Of all trolls, shadow hunters are the most feared. The traditional shadow hunter weapon is a fel glaive, a long double sword (with a blade set on either end of the handle) which looks a bit different from a moon glaive.[13]

The voodoo faith of the shadow hunter deals with beings they call the Loa. Supposedly, these spirits are mighty entities that grant the faithful extraordinary powers. By calling upon these voodoo spirits, the shadow hunter gains special blessings with which he can combat darkness and help those in need. The abilities granted vary according to the Loa the shadow hunter calls upon.

The Loa Legba is a master of swift motion. Through him, the shadow hunter learns to bestow great speed and grace to his allies.

Lukou is the Loa of healing and respite. She grants the shadow hunter the ability to heal his allies. With a word, the shadow hunter can invoke a scintillating rain of positive energy, which drops from the sky to heal all living allies it touches.

Samedi is the Loa of cemeteries and the restful sleep of the dead. In Samedi’s eyes, the undead are abominations that should be destroyed. A shadow hunter with this ability may attempt to smite an undead with one normal melee attack. If the shadow hunter accidentally smites a creature that is not undead, the smite has no effect.

Shango controls the realm of storms, and he guards the secrets of lightning and mayhem. By channeling the fury of this powerful and often unpredictable Loa, the shadow hunter can throw a lightning bolt that deals electrical damage.

Ogoun, the Loa of war, teaches the shadow hunter to place dire curses upon his enemies. The shadow hunter may change a single targeted individual into a frog. This ability functions like a shaman's

Dambala, the Loa of serpents and treachery, teaches the shadow hunter to move swiftly and quietly by changing his shape into that of a serpent.[14]

Shadow hunters in the world

Traditionally, most shadow hunters remain in their homelands, providing sound counsel to tribal chieftains and warriors as well as lending a hand in battle and during other times of need. Today, many shadow hunters roam the world in search of adventure while seeking to further their faith as well as the interests of their people. In olden times, shadow hunters donned special rush'kah masks when performing ceremonies. As they travel throughout the lands of Azeroth, many shadow hunters wear these unique ceremonial masks to cover their features and inspire fear in others.[12]