Once the domain of the archmage Arugal, the keep's new lord and master is the renegade forsaken Lord Vincent Godfrey.

Shadowfang Keep is a haunted keep not far from the borders of Gilneas in southern Silverpine Forest, on a high bluff overlooking Pyrewood Village. It was named for the forces of its former master,[1] the demented Archmage Arugal, who wrested the keep from Baron Silverlaine with his worgen "children" and held it until he was defeated by a group of heroes.[2] The keep was then occupied by the Scourge remnants and followers of the renegade Gilnean nobleman Vincent Godfrey, traitor to both his homeland and to the Forsaken who returned him from death.

During the Fourth War, the keep was in the hands of the Forsaken, who have captured it and are using it as a bio-weapons facility to wage war against Gilneas.

Shadowfang Keep was previously a part of the kingdom of Gilneas. It was the home to the lords of Pyrewood Village, who answered to Darius Crowley's family.[3] The lord of the castle was Baron Silverlaine and his forces were led by Commander Springvale. Jordan Stilwell and Daphne Stilwell used to live and work here before the Third War. Landen Stilwell was still here years later.

When the Scourge washed over Lordaeron, the Gilnean Archmage, Arugal, investigated the research of the mage Ur. With the sorcerer's knowledge, Arugal summoned the worgen with the blessings of Genn Greymane[4] and against the advice of the Kirin Tor.[5] The worgen successfully turned the tide against the Scourge, but became uncontrollable, attacking the Gilnean military. After this, Arugal's worgen ran rampant through Silverpine, eventually overwhelming Shadowfang Keep. Distraught and broken, Arugal accepted the worgen as his children and retreated into the keep. Communing with Alpha Prime, he became a key servant of the Wolf Cult, converting the humans of Silverpine into worgen, namely the Moonrage and Shadowfang packs. Protected by his worgen minions as well as the ghosts of the fallen Baron and his household, Arugal served his master in converting most of the forest's remaining denizens to the curse, with locations such as Deep Elem Mine falling as well as Pyrewood.[6] 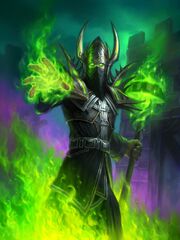 The Dark Master of Shadowfang.

After sometime, the entire Pyrewood Village was turned to the worgen curse, turning into the beasts at night. During the day, they were human and willing to provide supplies to Alliance travelers, though the keep was never friendly to these adventurers. They were led by the Pyrewood Council, who were all servants of Arugal. The Forsaken became increasingly suspicious of their activities, especially after the disappearance of one of their apothecaries, Apothecary Berard. After it was discovered that Arugal had transformed him into a worgen, the Forsaken assassinated the council.[7]

Arugal was eventually defeated and beheaded by agents of the Horde.[8] Following this, the only denizens of the keep in the years to follow were the Crown Chemical Co., who used the location as a base of operations for their schemes.

Several San'layn blood princes arrived at Shadowfang Keep and found Arugal's grave, raising the Archmage as a shade to serve the Scourge.[9]

Continuing his work converting humans to a wolf cult, the now undead archmage makes his home in a tower built and named for the keep, Shadowfang Tower. Here he and his new wolf cult were defeated as well.

After betraying both Gilneas and the Forsaken, Vincent Godfrey, Baron Ashbury and Lord Walden converted the abandoned keep into their holdfast against their enemies. The keep became a battleground between the Alliance and Horde vying for Godfrey's head, with both groups aiming to slaughter the man as well as claim the keep for their respective factions. These operations were led by Ivar Bloodfang and Deathstalker Commander Belmont respectively.

The Forsaken gained control over Shadowfang Keep, turning it into a bio-weapons facility where they began to produce plague to unleash against Gilneas. Meanwhile, the 7th Legion troops march towards Shadowfang in order to prevent its deployment.[10]

During the Third War, the wizards of the Kirin Tor battled against the undead armies of the Scourge. When the wizards of Dalaran died in battle, they would rise soon after - adding their former might to the growing Scourge. Frustrated by their lack of progress (and against the advice of his peers) the Archmage, Arugal elected to summon extra-dimensional entities to bolster Dalaran's diminishing ranks. Arugal's summoning brought the ravenous worgen into the world of Azeroth. The feral wolf-men slaughtered not only the Scourge, but quickly turned on the wizards themselves. The worgen sieged the keep of the noble, Baron Silverlaine. Situated above the tiny hamlet of Pyrewood, the keep quickly fell into shadow and ruin. Driven mad with guilt, Arugal adopted the worgen as his children and retreated to the newly dubbed 'Shadowfang Keep'. It's said he still resides there, protected by his massive pet, Fenrus - and haunted by the vengeful ghost of Baron Silverlaine.[11]

Looming over Pyrewood Village from the southern bluffs of Silverpine Forest, Shadowfang Keep casts a shadow as dark as its legacy. Sinister forces occupy these ruins, formerly the dwelling of the mad archmage Arugal's worgen. The restless shade of Baron Silverlaine lingers while Lord Godfrey and his cabal of erstwhile Gilnean noblemen plot against their enemies both living and undead.

Love is in the Air

Part of the Love is in the Air event takes place in Shadowfang Keep. Adventurers are sent by the Steamwheedle Cartel to investigate Crown Chemical Company inside Shadowfang Keep. Defeating the Apothecary Trio awards the achievement

The Worgen Curse afflicts the inhabitants of this dark castle. Unlike Pyrewood's good folk, Shadowfang's lords were bastards to begin with. They revel in their curse and eagerly lope into the moonlight to spill blood and rip warm flesh from living bones. Their howls can be heard as far away as Ambermill.[12]

Before being renamed Shadowfang Keep, it may have been called "Silverlaine Keep" or "Pyrewood Keep."