This article is about original instance. For revamped location, see Shadowfang Keep. 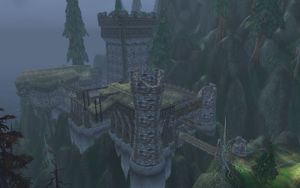 Shadowfang Keep is a haunted keep in southern Silverpine Forest, near Pyrewood Village. It is the base of operations for the evil archmage Arugal and his worgen progeny. 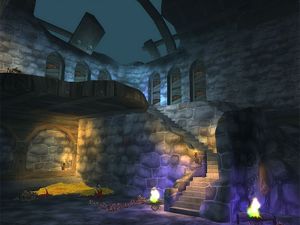 During the Third War, the wizards of the Kirin Tor battled against the undead armies of the Scourge. When the wizards of Dalaran died in battle, they would rise soon after - adding their former might to the growing Scourge. Frustrated by their lack of progress (and against the advice of his peers) the Archmage, Arugal elected to summon extra-dimensional entities to bolster Dalaran's diminishing ranks. Arugal's summoning brought the ravenous worgen into the world of Azeroth. The feral wolf-men slaughtered not only the Scourge, but quickly turned on the wizards themselves. The worgen sieged the keep of the noble, Baron Silverlaine. Situated above the tiny hamlet of Pyrewood, the keep quickly fell into shadow and ruin. Driven mad with guilt, Arugal adopted the worgen as his children and retreated to the newly dubbed 'Shadowfang Keep'. It's said he still resides there, protected by his massive pet, Fenrus - and haunted by the vengeful ghost of Baron Silverlaine.

Pyrewood Village is shadowed to the north by Shadowfang Keep, once a bastion of Alliance power but now the dark residence of a mad former mage of the Kirin Tor, named Arugal. The worgen that stalk the Keep, as well as the cursed villagers of Pyrewood, are the doings of this madman. During the Third War, Arugal made these worgen as allies but they could not be controlled and turned on him and the other soldiers. He went mad after this and now accepts them as his "children." His worgen run rampant throughout much of the forest.

During the events of World of Warcraft, agents of the Banshee Queen Sylvanas Windrunner were dispatched to both solve the mystery of the enigmatic worgen and ultimately terminate the source of the creatures' infestation in Silverpine. Eventually they were able to discover that the mad archmage, Arugal, was behind the worgen's presence, and the Forsaken command ordered him slain.

In World of Warcraft: Cataclysm the dungeon has been updated to reflect current events. Level range is 16 - 26 and heroic mode is available for level 85 players. Lord Godfrey has replaced Arugal as the final boss, given the former's attempted assassination of leaders of both the Alliance and Horde, ending with him fleeing to Shadowfang Keep.[1] 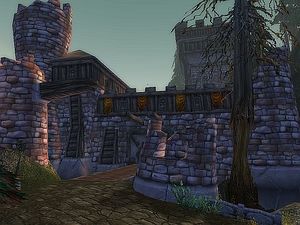 SFK is the first vaguely challenging instance that players are likely to encounter. In addition to the volume of mobs present, several of the mobs here cast various curses, nearly every type of Worgen has some sort of special ability (active or passive) that affects a group's ability to deal with them, and the undead humans make use of Silence, which means that a tank can be caught without healing in some fights if the healer(s) get hit with it.

However, since the nerfing of SFK's mobs, the caution previously required is no longer vital to success here.

For the level, the loot here is highly desirable, with a few different items that can sell well via the twink market. Several bind-on-pickup blue items are also to be found here, primarily for Mages and Warriors in particular. Although the level is still low enough that cash isn't hugely abundant, there is still some silver dropped.

Shadowfang Keep probably earned its name from the rumors of the worgen that guard it; before that, it may have been called "Silverlaine Keep" or "Pyrewood Keep."