Shadowforge City is the capital of the Dark Iron dwarves. The city is located in the depths of Blackrock Mountain and lies above the Molten Core. The city has a famous inn, the Grim Guzzler, and is the only place in the world where you can smelt Dark Iron. Shadowforge City is in constant conflict with the Blackrock clan and their black dragon masters.

Access to the city can either be through the Dark Iron Highway, Shrine of Thaurissan, or the Manufactory. The city is divided into several named areas including the Grim Guzzler, the Domicile, the Black Vault, or the Hall of Crafting. Some parts of the city can't be visited in-game, like the Ruby Crystalarium built by Fenella Darkvire.

Throughout the city, Dark Iron denizens are constantly working toward strengthening themselves for the ongoing war against the Blackrock Spire orcs and dragons. They work to create living stone warriors to take the Upper Blackrock Spire for themselves and their fiery master. Fire elementals are also patrolling the streets of the city.

After the Dark Iron Emperor, Thaurissan, summoned Ragnaros at the end of the War of the Three Hammers, the Dark Irons became the new servants of the Firelord. Summoning Ragnaros destroyed the northern regions of the Redridge Range including the former capital of the Dark Iron dwarves, the city of Thaurissan. In the need of a new capital, the Dark Iron constructed the magnificent Shadowforge City deep within the recently-formed Blackrock Mountain.

Moira Bronzebeard, daughter of King Magni Bronzebeard of Ironforge, was kidnapped on her way to Lakeshire by Dark Iron dwarves and brought to Emperor Dagran Thaurissan in Shadowforge City. Rather than simply being a prisoner, Thaurissan showed her the respect her father did not give her, listening to her when she spoke and expressed the belief that she could rule just as well as any man. Thus, Moira fell in love with the Emperor and married him. Kharan Mighthammer, the only escorting guard to survive the kidnapping, came to believe that the Princess was presumably ensorcelled, reporting this to adventurers that came to rescue him.

King Magni, upset that Moira was with an arch enemy of his family, sent a team to Shadowforge City to kill Emperor Thaurissan and retrieve the presumably ensorcelled Moira back to Ironforge. However, Moira refused to come home and announced that she was pregnant; additionally, the death of her husband left a terrible, fiery rage within her heart.

In the wake of King Magni's petrification, Moira returned to Ironforge from Shadowforge City with her infant son Dagran Thaurissan II to claim the throne. Backed by the Dark Iron clan, Moira ruled Ironforge arrogantly and with an iron fist. This didn't last as King Varian Wrynn went to Ironforge to rescue his son, Anduin Wrynn, that was held captive. In the end, Anduin convinced his father not to kill Moira eventually leading into the creation of the Council of Three Hammers.[2]

Since the creation of the council, Moira has been leading her people from Ironforge instead of Shadowforge City. The home of the Dark Iron dwarves is currently in flux. Queen-Regent Moira Thaurissan is preoccupied with maintaining the alliance with her former enemies. She hasn't had the chance to ensure the security of her son's future kingdom, as her "allies" on the Council relentlessly seek out any signs of treachery.

When the remaining Dark Irons join the Alliance under Moira, Moira travels to Shadowforge. It serves as the Dark Iron capital, with accessible areas being the Grim Guzzler, Black Anvil, Black Vault, Hall of Crafting, and the central area of the city. The city has been slightly modified with a bridge to remove the convoluted path from the Grim Guzzler to the Domicile area.

Dark Iron adventurers can get back to Shadowforge City using their 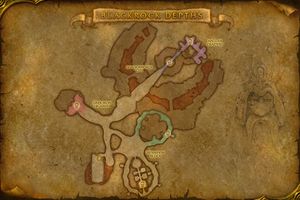 Map of the lower portion of Shadowforge City. 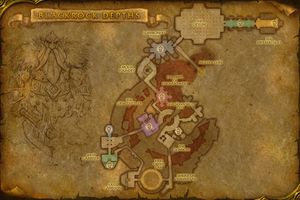 Map of the upper portion of Shadowforge City.