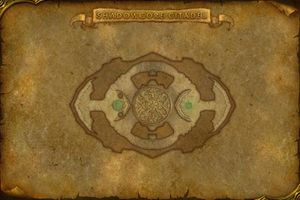 Map of the upper floor of the citadel. 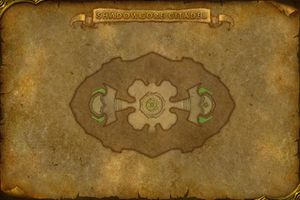 Map of the lower floor of the citadel. 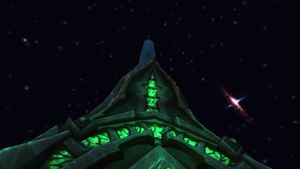 The citadel's exterior, as seen when looking up from one of the balconies.

Shadowgore Citadel is a Burning Legion fortress floating in the Twisting Nether and which is ruled by the eredar assassin Akaari Shadowgore.[1] Akaari built the citadel on a dead world to hold prisoners and extract knowledge from them, but when the location of the stronghold became known to the rest of the Burning Legion, she made a show of abandoning it. It had become a useless and unhelpful symbol, but it had served its purpose. She would later return to the citadel, but only in secret, and only to prepare for particularly difficult invasions or to interrogate particularly important prisoners.[2]

Subtlety rogues seeking to confront Akaari and claim the daggers she wields enlist the aid of an eredar named Val'zuun to open a portal to Shadowgore Citadel, where, after a few setbacks, succeed in killing Akaari and taking her weapons. Upon Shadowgore's death, the fortress begins to initiate a self-destruct sequence, forcing the rogue to hurriedly escape through another portal back to Azeroth.[1]