From Wowpedia
(Redirected from Shadows of Argus)
Jump to: navigation, search 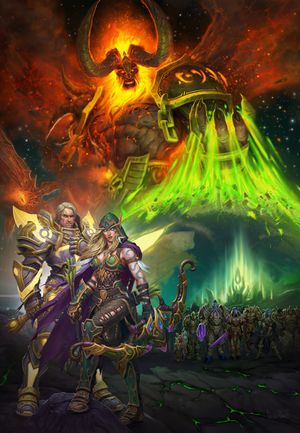 Patch 7.3.0: Shadows of Argus is the third major patch of World of Warcraft: Legion, focusing on assaulting Argus, the Burning Legion's capital world. It was first announced during BlizzCon 2016.

Following recent events in the Broken Isles, a link has been created between Azeroth and Kil'jaeden's homeworld of Argus, bringing the Burning Legion closer than ever to destroying Azeroth. In order to stop them once and for all, Illidan and Velen are taking the war directly to the surface of Argus, where they hope to join forces with Alleria, Turalyon, and the Army of the Light to launch an all-out assault on the Legion's primary base of operations.

Board the Vindicaar, a vessel that will serve as your mobile base of operations on Argus, as well as one of your few safe havens on the planet.

As you explore Argus, you'll visit new locations across the planet, experiencing the epic conclusion to the Legion storyline and unlocking new world quests and other content along the way.

Azeroth isn't the only world connected to this hostile place. While on Argus, you'll unlock the ability to enter the very portals the Burning Legion use to transport to other worlds. Once there, complete an event or defeat a boss to earn epic rewards.

New Dungeon: Seat of the Triumvirate

Once the heart of the ancient eredar civilization where Velen, Archimonde, and Kil'jaeden ruled their people, this temple has fallen to ruin. Return with Velen to retrieve an ancient relic of power, and battle the darkness that has overtaken this sacred place, in a new 5-person dungeon among the ruins of Mac'Aree on Argus, featuring four bosses:

As you progress through each of the areas to explore on Argus, you'll unlock new World Quests and new Emissaries eager for your help.

Harness the power of Argus to activate the Netherlight Crucible aboard the Vindicaar, allowing you to augment your Artifact Relics. The Crucible can be used to strengthen and customize Relics, increasing their raw power and allowing players to choose from a set of additional powers, including a second Artifact Trait to improve.

Your Class Hall and its assorted Champions played key roles in the defense of Azeroth, and their keen efforts are needed to succeed with the new challenges of Argus. You'll find dozens of new missions, along with new Troop types, and an increase in your Champions' item level to 950.

Loot dropped in Normal, Heroic, and Mythic dungeons is now increased in power by 20 item levels:

The difficulty of Heroic and Mythic dungeons has increased to reflect the improved rewards. Normal dungeon difficulty is unchanged.

Venture through the raids of Cataclysm to find new battle pets for the much-anticipated achievement, Raiding With Leashes V: Cuteaclysm. You'll boast about finding a host of mostly elemental pets when you revisit Blackwing Descent, Bastion of Twilight, Throne of the Four Winds, Firelands, and Dragon Soul.

Advance scouts have reported spotting 18 legendary boss pets scattered about Argus, and these miniature monstrosities have otherworldly special abilities that the denizens of Azeroth have never seen before, such as the slightly terrifying Greater Apocalypse ability. Additionally, more than a dozen different capturable wild pets are said to be found on Argus, as well as a number of pets that can only be obtained via reward items and the new

Professions on a New Planet

Professional development turns a new page on Argus, with new gathering nodes for Herbalism and Mining, new material types for Skinning and Tailoring, and a new soulbound reagent:

[Primal Sargerite]. Look for new items that can be created by crafters, as well as a new shoulder enchant that provides materials specific to Argus.

In a related turn of events, six renowned NPCs have emerged in the world of fishing. Every day, visit Akule Riverhorn, Corbyn, Ilyssia of the Waters, Impus, Keeper Raynae, or Sha'leth to earn reputation and explore the new rewards they have to offer, and ultimately earn the

[Thirty Tabards]" now require that a number of unique tabards be obtained. These Achievements no longer require the tabards be equipped.