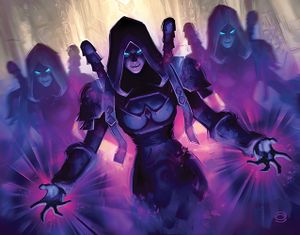 Shadowy Apparition in the TCG.

[Shadow Word: Pain] to summon a Shadowy Apparition each time it deals critical periodic damage. Shadowy Apparitions are shadowy versions of the caster that float slowly toward the afflicted target. Upon reaching their target, they deal instant shadow damage and disappear.

Prior to Patch 5.4, Shadowy Apparitions were non-controllable guardian pets. They could be targeted, and receive spells such as

[Leap of Faith], although there was rarely if ever any reason to attack or cast spells on an Apparition. The Apparitions appeared simply as shadowy, semi-transparent replicas of the casting priest, and would respond to terrain with normal animations, swimming when underwater, and making footstep sounds when walking on appropriate surfaces. The Apparitions moved on foot at walking speed, and so could often be easily avoided simply by moving away from them. They would also occasionally get stuck on terrain and objects, and could not reach flying targets.

These elements caused problems for shadow priests when fighting bosses involving flight or heavy movement. To combat these problems, Shadowy Apparitions were eventually redesigned as a floating missile effect.[1]

Apparitions' original appearance was based on that of the priest at the time that they were spawned. Priests suffering from the effects of

[Hex] or other transformations would therefore spawn Apparitions that matched their current form. However, Shadowy Apparitions would always appear in

[Shadowform], even if the priest was not.