For the tablet, see Shadra (object).

Elortha no Shadra,[4] or simply Shadra, is a spider loa.

She is represented on Azeroth through her high priest, a position that was held by High Priestess Mar'li for the Gurubashi until her death on the Isle of Thunder, and by Yazma for the Zandalari.[5] Her worshipers consist of the Witherbark and Vilebranch trolls in the Hinterlands, the Sandfury trolls in Zul'Farrak, the Gurubashi trolls in Zul'Gurub, and the Zandalari. The trolls use her venom as a powerful poison for their weapons. She is summoned by using the

[Idol of Shadra] at her altars in Shadra'Alor.

She can be encountered in the Hinterlands as a hostile level 35 elite.

The Witherbark tribe worships Shadra, and one time collected her most potent venom from her. The Forsaken, wanting her venom, wished to summon her. To summon her, it was required to know her true name: Elortha no Shadra.[6] After Shadra was summoned and killed, her venom was sent to the Undercity.[7]

Like the other primary loa worshiped by the Gurubashi tribe, Shadra was held in Zul'Gurub against her will during the time when the Hakkari were attempting to resurrect Hakkar the Soulflayer.

At Jintha'alor after the Cataclysm, the Vilebranch tribe drank Shadra's blood[8] and performed mass sacrifices in her name.[9] The Wildhammer wanted to kill her in advance before she could be directed to them, while the Forsaken once more wanted Shadra's venom for their apothecaries.[10] At Shadra'Alor, she was once more summoned and killed.

Shortly after the events of Landfall, Shadra communicated with Vol'jin — betrayed by Garrosh Hellscream — through visions. According to Khal'ak in the distant past a few Zandalari turned away from her worship to the powers of Mogu, which displeased the Mother of Venom. Following the Zandalari's defeat at the Shado-pan Monastery effort Bwonsamdi remarked that the silk dance would rejoice at the web Vol'jin weaved and would be a bit beholden to him due her Zandalari failing.[11]

Shadra was summoned by the Sandfury tribe at Zul'Farrak so they could sacrifice their prisoners - Aramar Thorne, Makasa Flintwill, Taryndrella, Hackle, and Murky - to her. But Taryndrella, dryad daughter of Cenarius, stopped her from doing so because as a child of nature there was no venom that could harm her, no spider that was not her friend, and death was as natural as life. Furthermore, Taryndrella stopped Shadra from going after her other companions. Shadra backed away and nodded her head out of respect — or perhaps out of fear.[12] 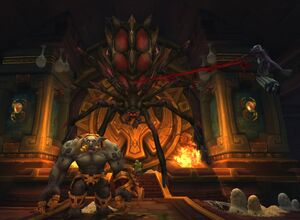 During the Zandalari civil war, her own high priestess Yazma trapped Shadra in the Shrine of Shadra in Zuldazar and feasted on her blood. Yazma thus consumed Shadra's might in the name of Zul, killing Shadra in the process, and transforming herself into a spider-like troll being. Wardruid Loti compared this to what happened to the loa in Zul'Drak.

Talanji considers Shadra to be dead.[13]

In de shadows, Shadra lurks.
Finding secrets as she works.
Webs she weaves 'round those in power,
Dark of night her waking hour.
Ya seek us out with ill intent?
Den writhe to poison most potent!

Her eyes are everywhere, dey see all.
Dey hear ya words, where dey can crawl.
What ya know, she knows as well,
Keeper of secrets she'll never tell.
Powerful strings she pulls in time of need,
With advice and warnings ya better heed.


Should her faith in us be lost,
Her good will falls, at terrible cost.
Betray her and ya soon will find,
Her venom is strong and most unkind.
If to Zandalar you stay true,
The danger will never come near you.[14] 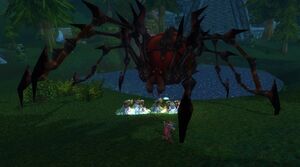 Shadra as of Cataclysm until Battle for Azeroth. 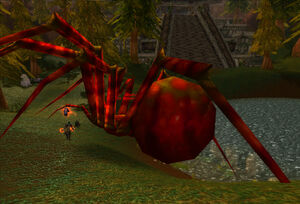 The Atal'Shadra are fallen followers of Shadra who joined with Yazma and turned hostile.