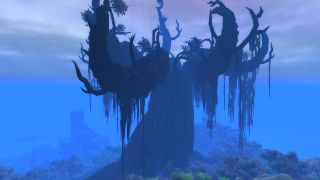 Shaladrassil is a World Tree situated in northern Val'sharah that existed since before the Great Sundering[1] and was once responsible for protecting the land,[2] but it was corrupted by the Emerald Nightmare[3] during the Burning Legion's third invasion of Azeroth. 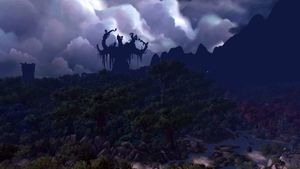 Shaladrassil as seen from Azsuna.

After the War of the Ancients, many surviving satyrs were rounded up. Thaon Moonclaw argued to execute them all but was overruled, and they were placed in an eternal sleep deep beneath the roots of Shaladrassil instead.[4]

The ancient Oakheart[5] and the green dragon Nythendra served as its protectors, until they were corrupted when the Emerald Nightmare took over the tree.[6] After it fell to the Nightmare, druids from the Dreamgrove went to investigate its roots.[7]

The massive roots of Shaladrassil arrived at the doorstep of the Temple of Elune,[8] spreading corruption throughout the forest. Isoraen Nightstar asked adventurers to gather root samples so he could discover their secrets and stop the tree's encroachment. Upon being brought the roots, he concluded that the corruption was irreversible and that their only course of action was to find a way to fight it at its source.[9]

A single root from Shaladrassil managed to surface in western Suramar, where the Darkfiend satyrs immediately began trying to corrupt the area.[10] Kalendros Irongrove asked adventurers to burn the root.[11] Still, traces of Shaladrassil's corruption subsequently remained in Suramar.[12]