Shalamayne in the Battle for Azeroth cinematic trailer.

Shalamayne is a legendary sword, the result of two night elven blades, Shalla'tor and Ellemayne, that were magically fused. Once wielded by Varian Wrynn, former King of Stormwind,[1] it is now carried by his son and successor, Anduin Wrynn.[2] 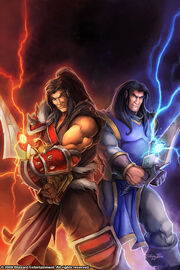 Shalla'tor and Ellemayne were a pair of magic elven blades forged during the War of the Ancients and wielded by the twins Vor'Illian and Lo'Vellian. In Darnassian, Shalla'tor means Shadow Render, while Ellemayne means Reaver.[3] While Ellemayne had a red gem, Shalla'tor had a blue one instead.[4]

The blades eventually came into the possession of Lady Jaina Proudmoore. After Varian Wrynn was split into two people by Onyxia's magic, the two ultimately found each other again and resolved to slay the black dragon. They were granted the night elven blades by Jaina, who aided them in the assault on Onyxia's Lair.[3]

When Onyxia inadvertently combined the two Varians back into one person, the two blades were merged into a single weapon as well.[5] This sword became known as Shalamayne,[1] and its first target was the black dragon Onyxia, who was slain by the merged Varian using his new sword.[5]

Anduin picking up the right half of Shalamayne at the Broken Shore.

After Onyxia's death, Varian returned home with the new sword at his side. Varian learned to wield his sword with either hand, although one would always be favored over the other. Shalamayne is also able to be split into Shalla'tor and Ellemayne.

Varian used his sword against Garrosh Hellscream and his Gorehowl during the Ashenvale war.[6] At the battle for the Broken Shore, Varian split Shalamayne into two to battle the Burning Legion. Upon his death, the split swords were left behind in the sand, their light snuffed out.[7] Without Varian's touch, the sword lay dormant, awaiting the touch of another to which it would respond.[8]

When the Armies of Legionfall began their assault on the Broken Shore, Varian's son Anduin Wrynn sneaked out of Stormwind and journeyed to Wrynnfall, the site of his father's demise, where he found Shalamayne.[2] The moment Anduin truly accepted the duties of a king,[8] light once again began swirling in the right-hand blade he was holding,[2] only this time with the golden glow of the priest instead of the orange-red hue of the warrior.[8]

Shalamayne thus passed down to Anduin,[9] making the young king a sword-wielding priest.

During the mak'gora between Varok Saurfang and Sylvanas Windrunner, Anduin gave Shalamayne to Saurfang, while Thrall gave him his axe. After losing the axe, Saurfang split the blade into Shalla'tor and Ellemayne, and managed to land a blow and wound Sylvanas's eye.[10]

Shalamayne has a unique narrow edge at the point and a thicker, angled edge further down. The hollow in the lower part of the blade glows like a sun. There is a backward arch at the bottom of the blade, and the hilt is long and slender.[1]

In Battle for Azeroth, the model of the weapon was re-detailed with refined accents, such as curving swirls down the blade. It may mean that Anduin had it reforged. However, it has been updated in its original appearances as well, for example in the Siege of Orgrimmar or Icecrown in Varian's hands, which may indicate that the appearance was just retroactively changed. It is worth noting that the conceptualization for this version of Shalamayne is referred to as 'Shalamayne Reforged' by Blizzard's art design. 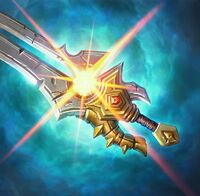 A Shalamayne-like Rallying Blade in Hearthstone.