Shalis Darkhunter is a night elf warden and the member of the Shadow Wardens, Watchers and The Wardens. Unlike other wardens, Shalis has not the traditional

[Umbra Crescent], wielding instead a two-bladed sword and, later, a bow.

She can be first found at Malfurion's Breach, on a rise overlooking the Ashen Fields in Molten Front. Later, if the player starts The Forlorn Spire, she is one of the random wardens that help him/her during that quest. 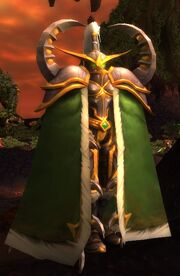 Shalis on the Molten Front.

After the conquest of the Forlorn Spire she travels to the Igneous Depths with Theresa Barkskin to stop a ritual being performed there by the Druids of the Flame, where the player meets her during Enduring the Heat.

She can be also seen in Starfall Outpost in Shadowmoon Valley and Yrel's Watch in Nagrand on Draenor.

During the Burning Legion's third invasion she returned to the Isle of the Watchers. 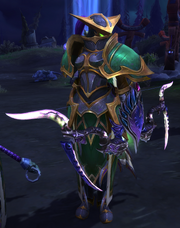 Shalis, alongside many of her other warden sisters, answer Maiev and Tyrande's call to action in Darkshore. She fights alongside the other wardens defending Tyrande during the ritual of the Night Warrior. Later, they defend the eastern flank. Here, she does not use any form of glaive, instead, she uses a bow.