Shan Bu was the leader of the Shan'ze clan of Mogu. Master of brutal lightning magic and powerful cloud serpents, Shan Bu's power matched even that of Niuzao. He served as a herald for the Thunder King's return and served him directly during the Isle of Thunder storyline. He resurrected Lei Shen's strongest pet, Nalak the Stormlord before being killed by Taran Zhu's Shado-Pan and their Horde-Alliance allies.

Players later encounter his servants, the Shan'ze Celestial Shapers in the Throne of Thunder.

Shan Bu is the leader of the Shan'ze Dao mogu invasion force, besieging the Niuzao Temple. He is directly involved in the quest

[90] Surprise Attack!, where he launches a final assault against Niuzao to claim Townlong Steppes.

After his invasion fails, he retreats north and hear the news that the First Emperor of the Mogu Empire has been resurrected by the Zandalari Empire. He was most pleased and looked forward to standing by his side once again. In Tear Down This Wall!, he and War-God Al'chukla are ordered to protect the palace gates from the Alliance and Horde adventurers, along with Kirin Tor Offensive led by Jaina Proudmoore and Vereesa Windrunner and Sunreaver Onslaught led by Lor'themar Theron, Scout Captain Elsia and Archmage Aethas Sunreaver. As he blamed the Zandalari to hold the wall from us, he retreated back to his Emperor.

[90] Decisive Action, he is asked to stop the adventurers from obtaining the Stormsea Landing ship. He summoned Hu'seng the Gatekeeper to make sure that they won't pass into the palace. Thus, that was broken as well.

At last, everyone including the Shado-Pan led by Taran Zhu, with his followers Yalia Sagewhisper and Taoshi, decide to take the fight to Shan Bu himself inside the Thunder King's citadel. After they arrive, a battle between Shan Bu and the attackers commences. After fighting through his mogu and Zandalari minions, Taran Zhu taunts him by saying that he's trying to create a God. Shan Bu responds "Who needs a god? We have the Thunder King!" He finishes the ritual to bring Nalak, the Storm Lord back into the world. In an attempt to distract Shan Bu, Taran Zhu enrages him by telling him "Come and face me Shan Bu. Or is the court of the Thunder King a den of cowards." Enraged, Shan Bu leaps towards Taran Zhu and engages him. After a while, Shan Bu grabs Taran Zhu by the neck and attempts to choke him to death. Before he can kill Taran Zhu, the adventurer finishes him off and he falls to the ground. His last words are that he has failed Lei Shen, and thus is his downfall. 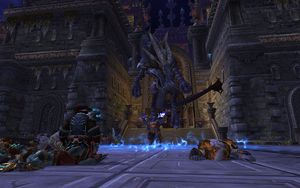 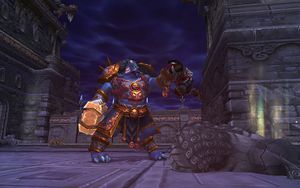 As my emperor wills!
Bar the gates. The Zandalari have failed to hold the wall.
Awaken, Hu'seng! The docks are your responsibility. See that none pass his majesty's gates.
Taran Zhu! It does not matter how many you array against the Thunder King. Soon all will kneel before him.
Who needs a God? We have the Thunder King!
Trolls - make yourselves useful. I am almost finished here.
Arise, Nalak! Protect our beloved emperor.
The emperor will be most pleased when I present him with your head, Shado-Pan.
Ours is to rule. Yours is to serve.
You are weak. You Shado-Pan scurry through shadows like roaches.
Your "Alliance" is all flash, no strength whatsoever.
Your "Horde" is a disgusting pack of animals, hardly worth enslaving.
Your cries of pain delight his majesty!
I tire of your insolence! I will choke the life from you, impudent slave!
I... no... My Emperor! My Emperor, I have failed you! (Last words spoken)