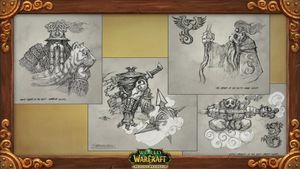 Concept art of three pandaren clans and the Shado-Pan. 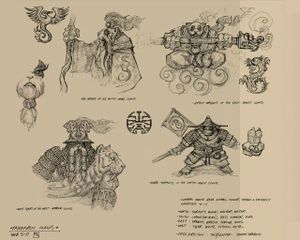 Earlier concept art of four (or five) pandaren clans in

Shao'din is the word for a pandaren clan in Pandaren.[1] Concept art exists for clans in Mists of Pandaria, but they never appeared in the expansion itself, being replaced by monk and priest orders serving the four August Celestials.

After the pandaren left the night elves, the pandaren clans, or shao'dins, traveled far across the seas and established crude but beautiful cities of stone and sturdy bamboos reed on an island they named Pandaria.[2] Each pandaren belong to a shao'din and are led by shodo-pans. Pandaren are courageous and fearless, and thus their armies have amazing durability and cohesion. A unit of infantry serves under a wardancer, with a host of wardancers serving under a shodo-pan. Each shodo-pan from a shao'din has a host of warriors and wardancers at his command. Recently introduced to the pandaren are firearms, which are beginning to take a more important role in the way the pandaren wage war. While only a few of the shao'dins have rifle regiments, pandaren have taken to the rifle like a dwarf to ale.[3]