Shards of the Alliance (WC3 NightElf)

Shards of the Alliance is chapter 6 of the Terror of the Tides campaign.

It was a series of small fights between members of the night elf expedition to Lordaeron led by Maiev and Tyrande and a small band of blood elves led by Kael against Scourge raiding parties.

Three days later, on the western coast of Lordaeron, the night elves venture cautiously into the shifting shadows of Silverpine Forest.

Deciding to commune with the land Malfurion departing from his companions but not before reminding them to focus on Illidan, and not their personal dispute with one another. After agreeing the Night Elves moved inland and soon encountered Prince Kael'thas Sunstrider and the Blood Elves (surviving High Elves who renamed themselves in honor of their fallen. The two elven forces quickly encountered into an agreement with the night elves would help the Blood Elves escort their caravan to safety and in return the blood elves would help them hunt the demon they were seeking. Moving as one the elven forces were eventually able to escort the caravan across the river Arevass after fighting their way through Scourge forces. However the Scourge appeared in greater numbers and Tyrande made the decision to use

[Starfall] while standing on the bridge in order to stop the Scourge from following the Elven forces. While this tactic did destroy the undead, it also destroyed the bridge and Tyrande was swept down the river. Knowing that it the river would lead Tyrande into the heart of Undead territory Prince Kael'thas warned Maiev that they had to rescue her, only to be bluntly told that Tyrande was a soldier who knew the risks and that he would have to honor his end of the agreement now.

Escort Kael'thas and His Caravan

Escort Kael'thas and his supply caravan across the River Arevass.

Kael'thas has stashed some gold and lumber nearby. Retrieve the hidden resources to allow the purchase of mercenaries and other supplies.

Maiev Shadowsong: Our forces will be ready to move out soon, although we still know next to nothing about this strange land Illidan has run to.

Malfurion Stormrage: This land is called Lordaeron, Maiev. It is the homeland of the Alliance that aided us at the Battle of Mount Hyjal. I was told that its kingdoms--both human and elven--were consumed by the undead Scourge.

Malfurion Stormrage: These forests have suffered grievously. I must leave you both for a time. I will enter the woods and attempt to commune with the land itself.

Maiev Shadowsong: While you're gone, we'll set out and try to pick up Illidan's trail.

Malfurion Stormrage: I expect you both to stay focused on your task. You can settle your personal dispute after we've found my brother.

Maiev Shadowsong: Of course, Shan'do. We'd best get moving.
Malfurion rides off into the woods. Tyrande and Maiev continue until they reach the outskirts of an encampment.

Tyrande Whisperwind: This was an Alliance encampment. The attack must have come recently.

Blood Elven Swordsman: Strangers, milord! They don't appear to be undead, but...

Prince Kael'thas: Ishnu-alah, night elves. I am Prince Kael'thas. I must admit, I'm surprised to see your kind there. But, whatever your business, I fear you will find only death and shadow in this cursed land.

Maiev Shadowsong: Ishnu-dal-dieb, Kael'thas. I am Maiev Shadowsong, and this is Tyrande Whisperwind. We are hunting a powerful demon that arrived here recently.

Prince Kael'thas: Curious. I don't know about any demon, but something's riled the undead based at Dalaran. They've been hounding us day and night. We were about to abandon this post and seek refuge on the other side of the River Arevass.

Tyrande Whisperwind: Hmmm. Then we shall lend you our aid, young Kael.

Tyrande Whisperwind: Perhaps once your people are safe, you will help us hunt the demon we seek?

Prince Kael'thas: It would be an honor, milady.

Prince Kael'thas: The undead are attacking! The caravan must be protected!

Maiev Shadowsong: Do not fear, Kael. Our mountain giants are more than capable of handling these wretched curs. Their stormy hides are nearly impervious to their clumsy attacks.

Maiev Shadowsong: We are wasting our time here, Tyrande. We should be looking for Illidan.

Tyrande Whisperwind: These people need our help, Maiev! Their brethren aided us against the Legion. We will honor that debt now.

Prince Kael'thas: Sadly, I have only a few warriors left. The Scourge has pressed us hard these last few months.

Maiev Shadowsong: Kael, where are your high elven brethren? Do they not fight the undead as you do?

Prince Kael'thas: The Scourge devoured our ancient homeland of Quel'Thalas. The once proud bloodline of my people is nearly spent. The few of us that remain now call ourselves blood elves, in homage to our murdered people.

Tyrande Whisperwind: I grieve for your people, Kael. But you must not allow rage and despair to poison your heart. You may lead your people to a brighter future.

Prince Kael'thas: This is one of our last holdouts on this side of the river. We will rest here for a spell and gather reinforcements.

Prince Kael'thas: We stand at a crossroads, my friends.

Prince Kael'thas: There is a shorter path to our destination, but it will take us perilously close to an undead bastion.

Prince Kael'thas: The other route is safer, but it will take us longer to cross the river.

Maiev Shadowsong: Both routes will be dangerous, nonetheless. Let us choose quickly and be on our way.

Maiev Shadowsong: Undead flyers! We must find a way to repel them!

Prince Kael'thas: This is the bastion I told you about. It must be destroyed if the caravan is to make it through.

Tyrande Whisperwind: Yes. Perhaps we should keep the caravan moving?
Several undead come out from the village and attack.

Prince Kael'thas: Damn! They were waiting for us! Protect the caravan at all costs!

Prince Kael'thas: Ah, a mercenary camp! We could hire some of them to aid us, but we'll need to retrieve some of our hidden gold caches in order to pay them.

Prince Kael'thas: We're fighting a losing war here, milady. The undead close in around us daily. It's necessary to keep our assets hidden, yet accessible. We have caches secreted throughout the wilderness.

Maiev Shadowsong: Then we shall retrieve them for you.

Maiev Shadowsong: We've driven them back, but the second wave is advancing!

Prince Kael'thas: We've run out of time! The caravan will not survive another assault!

Tyrande Whisperwind: Kael, get your caravan moving across the river! I will stay behind and hold the bridge!

Maiev Shadowsong: That's very noble of you, Priestess, but you're no match for a force that vast!

Tyrande Whisperwind: The goddess is my shield, warden. Elune will grant me the strength.
While Kael's caravans and Maiev get across the river, Tyrande stands on the middle of the bridge and casts starfall, slaughtering several undead near her.

Prince Kael'thas: It's working! She's holding them back!

Tyrande Whisperwind: Merciful goddess!
The starfall is too powerful and destroys the bridge Tyrande is on. Before long, it collapses and she flies down the river.

Prince Kael'thas: We must hurry to save her! That current will take her straight into the heart of the undead lands!

Maiev Shadowsong: No, Kael. Tyrande is a soldier; she knew the risks she took. We have a greater mission to accomplish now, and our time grows short.

Maiev Shadowsong: Your people are now safe. You will uphold your end of the bargain and help me hunt the demon I seek. 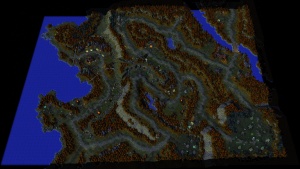