For the tavern, see Shark (tavern).

Sharks are large aquatic fish-like beasts. They are found in all seas of Azeroth, nearly all of them being aggressive.

Sharks have no true bones, only cartilage. Because their feeding habits involve biting things with a great deal of force, losing teeth is common. Therefore, sharks have multiple rows of teeth which they replace constantly throughout their lifetimes.[1] After birth, newborn sharks quickly flee their hungry mothers. Their early independence makes them dangerous, even while young.[2]

Old Man Barlo mentions spear-hunting mammoth sharks off the coast of Azshara and needing a special toxin to do it.[3]

There exists many types of sharks, but due to the limited models created, all them tend to look alike except for the new models created for the Cataclysm expansion. 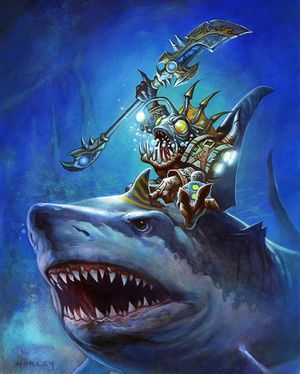 Grglmrgl, a deep sea murloc riding a shark in the TCG.

These carnivorous fish are aggressive and liable to make unprovoked attacks against anything that approaches them. Smaller sharks are from five to eight feet long and not usually dangerous to creatures other than their prey. Large sharks can reach around fifteen feet in length and are a serious threat. Huge sharks are true monsters, like great whites, that can exceed twenty feet in length.

Sharks circle and observe potential prey, then dart in and bite with their powerful jaws. A shark can locate creatures underwater within a thirty-foot radius. This ability works only when the shark is underwater. A shark can notice creatures by scent in a 180-foot radius and detect blood in the water at ranges of up to a mile.[4]

Aquatic shaman turn into ghost sharks rather than ghost wolves.[5]