Sharpbeak is Swiftwing's son and heir. He has recently been captured by the Vilebranch trolls, but Gryphon Master Talonaxe of Aerie Peak has sent some Alliance agents, who saved him. He returned to Aerie Peak where he lives happily with his parents, Swiftwing and Keenclaw. Though his parents' names are mentioned, in the game they are just called Sharpbeak's Father and Sharpbeak's Mother when they fly to him. 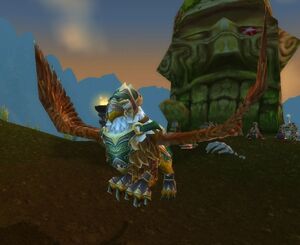 Sharpbeak no longer needs saving and is now a powerful fully matured level 35 elite gryphon. Found in the same location as before, he appears to be assisting the wildhammer dwarves in an attack on the Vilebranch trolls.