Not to be confused with Shatter (dread raven).

Shatter is a passive level 14 Frost mage ability. It multiplies the critical strike chance of all the mage's spells against frozen targets by 1.5 plus an additional 25% (50% at level 36). A frozen target is a target immobilized by a frost-based effect, such as

[Freezing Trap] or the freeze effect from the

[Freezing Band]. The critical strike chance applies to all of the mage's schools.

Freeze effects have a much higher chance to break when taking damage, meaning it can be difficult to get more than one spell to land on each freeze. It is still possible to get two criticals on the same freeze effect before it breaks. First, use a long cast time spell that also has a projectile travel time, such as

[Frostbolt]. Immediately after the cast, use an instant spell such as

[Ice Lance], if you are fast enough and at good range. The check to see if the target is frozen, and thus the critical strike check, is done at the time the cast completes, while the freeze effect is not removed from the target until after the spell hits. Thus, both spells will have the benefit of Shatter due to the time of flight for the first spell. 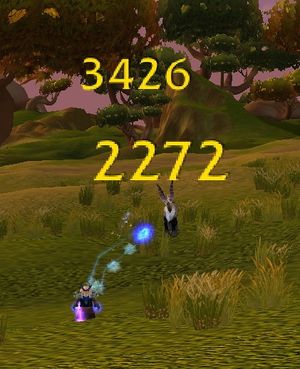 Reduced to three ranks, but kept the same effect at max rank.