For the city from the main universe, see Shattrath City.

“At the center of Talador shines the glorious cathedral city of Shattrath: a museum metropolis, an architectural marvel, a preserved recreation of ancient draenei culture—entirely occupied by the Iron Horde.”

Shattrath City is the old capital city of the draenei, located in the northwestern part of Talador. The Iron Horde under Blackhand seized the city and used it as a staging ground, though were driven out by the draenei, the Frostwolf clan, and heroes from Azeroth. Later, the treacherous Socrethar of the Sargerei took control of the city with the aid of Burning Legion agents.

The Auchenai led by Exarch Maladaar, aided by the Sunsworn led by Lady Liadrin, seek to retake the city and place it back under the draenei's rule.

Under Blackhand's command, the Blackrock clan war machine invaded Shattrath by sea and drove out its draenei residents. The city was used as a staging ground to attack the Iron Horde's enemies in the region, as well as a dock and a point of congregation for Iron Horde troops. Blackhand's second-in-command, Orgrim Doomhammer, was also stationed there.

A combined force of heroes from Azeroth, draenei, and Frostwolves (including Durotan, Draka, Khadgar, Maraad, and Yrel) take part in the Battle for Shattrath, and assault the Iron Horde army from several points. Orgrim Doomhammer abandons the battle after witnessing the deaths of innocent draenei, though is immediately confronted and killed by Blackhand, who then does battle with Durotan, Maraad, and Yrel aboard his ship. Maraad is killed in the ensuing chaos, Yrel and Durotan work together to survive Blackhand's onslaught, and the pair escape with Khadgar's help. Though Shattrath was freed from the Iron Horde, Blackhand had also survived and fled the city.

Draenei returned to Shattrath following its liberation, though the treacherous former exarch Socrethar later usurped the city with the aid of the Burning Legion and the Sargerei. Heroes are sent there from their garrisons to combat the new threat.

With Auchindoun safe, Exarch Maladaar and Lady Liadrin traveled north to Shattrath to deal with Socrethar and the Legion and relieve the city. Joining forces with the Sha'tari Defense, the Auchenai and the Sunsworn now seek to retake Shattrath completely. 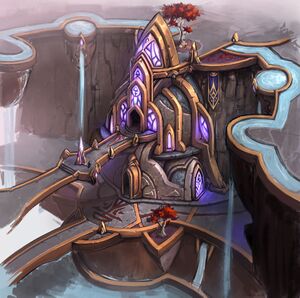