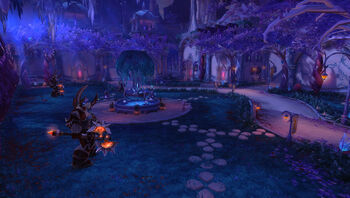 The Shimmershade Garden (or Starlit Garden)[1] is a small district located in the western portion of the nightborne Suramar City. It mainly consists of an open garden area with a fountain, shrubbery, and other flora native to Suramar.

The garden is popular for relaxation and recreation among the city's citizens. Neighboring districts include the Artisan's Gallery to the south, Evermoon Commons to the east, and the Terrace of Order to the north.

Since the outbreak of the Nightfallen rebellion within Suramar, the Shimmershade Garden has been largely occupied by demonic forces of the Burning Legion, as well as elements of the Duskwatch. In addition, the garden was notably frequented by a large number of loyalists of Grand Magistrix Elisande. With such heavy security, relatively little rebel activity occurred in the district for most of the conflict, though it was included in an insurrectionist propaganda campaign with public notices being placed in prominent locations.[2]