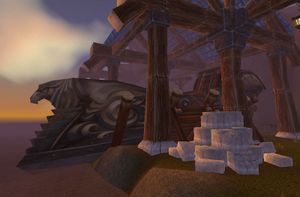 An icebreaker under construction at Stormwind Harbor.

Shipyards are buildings where ships are built. A nearby foundry is required in order to create the armor plates and cannons of heavier warships.

During the Invasion of Draenor, Zeth'kur was the location of major orcish shipyards on Hellfire Peninsula.[1]

Shipyards were primarily responsible for the construction of the various warships in the Alliance's naval forces. Elevated on strong pillars of ironwood, these waterfront structures were also responsible for receiving and processing the oil necessary to construct these ships of war. Shipyards were manned by dedicated sailors and shipwrights who strived tirelessly to keep the fleet running smoothly and efficiently.[2]

Although a haphazard collection of stone, mortar and cheap lumber, the shabby orc shipyard was perhaps the most important structure in the Hordes' war effort. As the construction site for warships, transports and tankers, shipyards served as a vital link between the scattered clans across Lordaeron. These sites also had crude processing facilities, enabling tankers to deliver shipments of oil to them. The shipyards were manned by procrastinating, slovenly orcs who somehow managed to keep production and maintenance on schedule.[3] 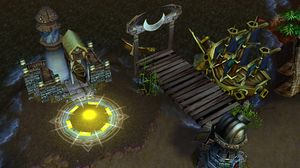 Shipyard and docks at the Coastal Base.

This bustling yard full of goblins is eager to sell you a transport ship capable of carrying units over water.[4]

In Warcraft III: The Frozen Throne, naval units made a greater appearance in the campaigns, and as such the night elves, blood elves and Scourge were given their own unique shipyards from which to purchase transport ships, frigates, and battleships. The orcs were still using the Goblin Shipyard but were also given their own trademark naval units.

Shipyards are where ships are made and sold. A shipyard community has the skills and materials to build sailing vessels. The community is situated on a river, lake or sea. The community can build and maintain a fleet of sailing vessels, or it can take on repair work for other communities as a means of gaining additional income. Partially completed sailing ships can be seen near the water; as well as large stocks of timber planking, equipment for heating and bending timber.[5]

Any harbor or dock could potentially be a shipyard because of the scaling issues in World of Warcraft, for even a small seaside settlement could be considered in lore to be an important naval community. A good example of that ambiguity is Sun's Reach Harbor in the Isle of Quel'Danas: it is an harbor where elven destroyers are moored, but it is not confirmed to be a shipyard where they are also actually built. Most naval powers of Azeroth should have their own shipyards, excepted the Forsaken, for their navy is composed of ships dredged up from the bottom of the ocean, most of which were once among Lordaeron's fleets.[6]

Solog Roark is considered a genius around a drydock and designed most of the naval facilities of the Iron Horde.