Shirvallah is a Zandalari tiger loa, also revered by the Gurubashi and Darkspear trolls. Shirvallah's last champion was the Zandalari High Priest Thekal. At some point in the past, Shirvallah's previous Zandalari high priest wielded the Warmace of Shirvallah, a brutal Zandalari mace with an ornate frame which claimed many lives in an unbidden attempt to honor Shirvallah. Long ago, it was lost to the sea with the high priest who wielded it.

In modern times, in order to quell Hakkar the Soulflayer, King Rastakhan sent powerful champions of the loa, the Zandalari High Priests serving Hir'eek, Shadra, Hethiss, Bethekk and Shirvallah, into the ancient city of Zul'Gurub. Despite their best efforts, they fell under the sway of Hakkar and were forced to channel power into the blood god. Ultimately, Shirvallah's Zandalari champion, High Priest Thekal, was slain by the adventurers who entered the city and killed Hakkar.[1]

During the Invasion of Pandaria, after surviving his assassination attempt, Vol'jin conversed with Bwonsamdi and the spirit of his father Sen'jin. During the conversation, he noticed distant laughter that suggested Shirvallah and Hir'eek were enjoying the exchange.[2]

By the time of the war in Draenor, troll druids[3] had created a way for all druids to take on a half-tiger form like those of Shirvallah's champions, called the

Priests of Shirvallah are present in the Hall of the Lesser Loa in Zuldazar. 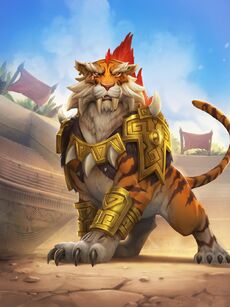 In the Hearthstone expansion Rastakhan's Rumble, Shirvallah serves as the patron of Shirvallah's Tigers, a proud and righteous team of troll paladins, and personally appears as a legendary paladin card. Her flavor text reads: "On bended knee Thekal placed his weapon upon Shirvallah’s altar, whereupon she slowly knocked it off with her paw."

Strangely, Shirvallah's Hearthstone appearance is almost identical to Kimbul's model in Battle for Azeroth, even including the scar over the right eye, with only a few armor pieces to set them apart.