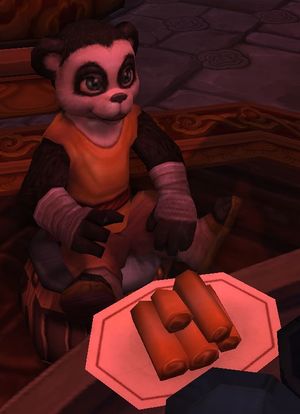 Shisai Stormstout is a pandaren from the Wandering Isle. He is the son of Chon Po and the older brother of Li Li.[1]

Shisai, unlike his sister who thirsts for adventure, is content to get his adventuring from being told stories. He and his sister, were students of Strongbo, the Wandering Isle's most proficient martial artist. Shisai himself was trained in the martial arts from a very young age.[2]

While eating dinner with his family Shisai his father and sister got into an argument about the events of Li Li's prior adventures. When the argument concluded Shisai, who found himself alone at the table, couldn't help but remark how awkward things were.[3]

Shisai and his father Chon Po appear in Mandori Village, just outside the Temple of Five Dawns. Li Li, who had returned to the Isle with her uncle Chen after the destruction of the Peak of Serenity, was irritated that her brother preferred to sit and eat in the tavern with their father rather than go on adventures, and she went off with the Grand Master of the Order of the Broken Temple to Ramkahen in search of the Fists of the Heavens.