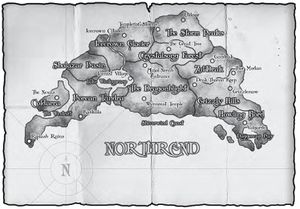 The Shiverwind Coast in southern Dragonblight.

The Shiverwind Coast is the coast of the Dragonblight. It slopes northwards to the Dragonblight's single valley. Expert sailors can land small boats almost anywhere along it. Those with less experience or bigger boats land in Daggercap Bay instead. The human druid Mitrius spent two years on the coast, studying various plants and sea creatures. He was less than a day's travel from a murloc tribe on the coast.[1]

Although there is no mention of this coast in World of Warcraft, it is likely it is the Forgotten Shore in the Dragonblight.