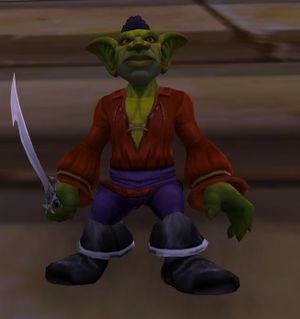 Short John Mithril is a goblin pirate captain of the Bloodsail Pirates[2] and an arena master in the Gurubashi Arena in the contested territory of Cape of Stranglethorn. He initiates the battle of the chest in regular intervals of every 3 hours. When the game clock strikes 12, 3, 6, or 9, Short John will start the battle.

He also appears on Mechagon Island in search of murloc treasure.