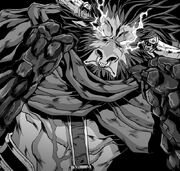 Shotoa, imbued with the power of the elements

Shotoa was a tauren shaman. Shotoa lived sometime after the era of the War of the Three Hammers. He was blessed with a strong connection to the elements during his childhood.

When Sorcerer-thane Thaurissan released Ragnaros and shattered the Redridge Mountains of the Eastern Kingdoms, the effects of the natural upheaval were felt as far as Kalimdor. Like the Eastern Kingdoms, Kalimdor was also suffering from natural disasters ranging from earthquakes to the land shattering apart. The Earthen Ring convened to discuss the effects of the natural upheaval and how to deal with the threat to their people. With the world being so chaotic, at times the elements had refused to answer the calls of the shaman, making the shaman's role in defending their people from the natural disasters difficult. While Shotoa advocated that they take a more commanding role with the elements and force the elements to do as they demand, Oreg Earthfury advocated for the Earthen Ring to follow their traditions of old and continue bargaining for and borrowing the powers of the elements.

A tauren camp was moments later beginning to collapse from earthquakes. The Earthen Ring shaman pooled their strength to protect the civilians from the natural disaster but Shotoa's apprentice, Kiche fell into a crevice and was about to fall. Oreg tried to stop Shotoa from pursuing as they were unable to stop the land from tearing itself apart but Shotoa disregards his warnings and commands air elementals to carry him over to rescue his apprentice. The land tears itself apart and both are engulfed by the crevice and fall to their deaths.

Two hundred and fifty years later, Shotoa reappears saving Camp Narache from a fire and a centaur attack. He claims that the life force of Azeroth had saved his life and has been preserving him. He convinces many of the Earthen Ring shaman, including some members of the Elder Council, to abandon their traditional methods of asking elementals for their power and advocated a new method in which shaman domineer the elementals to do as they command.

Muln Earthfury asked the Spirit of the Wilds for guidance and he received a vision of the cavern Shotoa fell into, where he learned that Shotoa wasn't preserved by the life force of Azeroth but by the energies of Ragnaros' release. Shotoa is in reality, a fire elemental wearing his shape.

Muln gathered the rest of the shaman and followed Shotoa and his group to Feralas. It is later revealed that Shotoa led his followers to a Grimtotem ambush in the hope of weakening the Earthen Ring. Muln and his forces arrived but with the elements in disarray, they were at a disadvantage against the Grimtotem warriors and shaman who were using Shotoa's more reliable shamanistic methods.

Shotoa commented that a shaman as powerful as Muln could usurp authority from the weaker Grimtotem shaman controlling the elementals and save Kettara, (who was held captive at the hands of a giant earth elemental) if he imposed his will on them. Muln tried asking but was unable to break the earth elementals' control, so he helped in the main fight, destroying a number of fire elementals to try and get to the shaman commanding the earth elemental. He was too slow and the Grimtotem orders the elemental to crush Kettara. Muln promptly caused Shotoa to burst into flames before using a cyclone to fly at Shotoa in a rage.

Muln told Shotoa he knew his secret, prompting him to burst into flames as he battled Muln. Shotoa told Muln that his master has forces all over the world working to bring its end. Muln opened a chasm under Shotoa trying to trap him but he was unable to get it to reclose, so he asked air, water, and earth elementals to aid him. At first they refused to work together but Muln motivated them to work together by telling them that they'd all be threatened with slavery under Shotoa and his fire elementals, which prompted them to work together.

The three elementals each counter part of Shotoa's powers allowing Muln to crush his head with his totem.[1]